"We are the club with the highest revenues in the world, this allows us to take our place in a demanding international market," added the president in his opening speech at the Ordinary General Assembly 2018.
The Real Madrid president, Florentino Perez opened the Members Committee General Assembly 2018, which was held in the Municipal Palace of Congresses, with an intervention in which Zidane, Cristiano Ronaldo and Doncic were all praised and proceedings began by paying tribute to the members and Madridistas who died in the past year, among which were the ex-players Manuel Sanchís and Jensen. The president highlighted the phenomenal moment the club is going through: "Madridistas are happy and proud. We are witnessing history in terms of the sporting, social and economic sides, which is historic. We are European champions in football and basketball in the same season for the first time in the history of sports. We are the club that has the most European Cups in football and basketball."

“Here we have la decimotercera, the 13th European Cup in football and la décima the 10th European Cup in basketball. We are enjoying exceptional institutional stability thanks to Madridismo itself and an economic independence that allows us to be masters of our own destiny".

The Thirteenth European Cup
"Our thirteenth European Cup in football has strengthened a sports project that we launched in 2000, faithful to the strategy laid out by our president, Santiago Bernabéu. With players who have already entered the Real Madrid history books and world football history, we won our third consecutive Champions League and the fourth in five seasons. Once again Real Madrid is the only team to do it and, for the first time, our team achieved the Champions League, the Club World Cup, the UEFA Super Cup and the Spanish Super Cup all in the same season."

"This sports project has always been linked to what we call the Bernabéu equation. It has always been the key economic and sporting equation that leads to our success. The best players in the world and in Spain itself with an emphasis on youth, and of course, taking care of our youth team as the basis of who we really are".

The squad
“We have a spectacular squad, with 11 players nominated in the FIFA World XI, which will be announced tomorrow in London: Navas, Courtois, Carvajal, Sergio Ramos, Varane, Marcelo, Modric, Kroos, Casemiro, Isco and Benzema. Among them, Modric, World Cup golden ball winner and last week named by UEFA as best player in Europe, who has now been nominated for The Best award from FIFA for best player in the world”.

“A squad designed to keep winning titles and led by Julen Lopetegui. Our coach came to Real Madrid after being Spain coach and without having lost a single match in the two years he was in charge of the Spanish national side. We have a team who are going through a period that will be remembered forever.

Cristiano Ronaldo and Zidane
"Cristiano Ronaldo is the top scorer in the history of our club and the worthy successor of Alfredo Di Stéfano. Over 9 seasons for Real Madrid he set a precedent and his career wearing our shirt will be passed down from generation to generation. With Real Madrid he has won 16 titles and scored 451 goals in 438 games. He won 4 Ballon D’or awards, 3 Golden Boots and is an example for all those who wear this shirt and for all those who dream of doing it themselves one day".

"Zidane is another our greatest representatives ever. As coach of the first team he went down as one of the great giants of Real Madrid. In just 2 years and 5 months he won the club 9 titles, including 3 Champions League titles in a row, something that nobody has achieved in the world. Zidane is one of our great legends and he knows that, like Cristiano Ronaldo, this will always be his home."

“The youth team is fundamental to help understand our identity. Each and every year we show that we have the best youth academy in the world. And not only for the 10 players that make it to the first team at Real Madrid but for the contribution the squad makes to the Spanish League, to other major leagues and other big clubs."

Real Madrid City
"September 30th marks the 13th anniversary of the inauguration of Real Madrid City. Our Madridistas are proud to have a football and values training centre, where professionals and coaches from the club itself convey what this badge and this shirt means."

Basketball
"We are also proud of our Basketball team. Here is the tenth European Cup. We also have the 34th league trophy. Of course there is the Super Cup we won last night. This legendary team, along with our coach Pablo Laso, continues to bring glory to Real Madrid and continues enjoying the most extraordinary cycles of our history."

"The tenth European Cup that we won in Belgrade once again underlines the team's dominance, with our captain  Felipe Reyes leading the way, he is a symbol of the team and has played the most games in the ACB league: 761”.

Special mention for Doncic
"He came to the club at the age of 13 and will always hold Real Madrid in his heart. He trained with us as a player, grew as a person and now, after winning everything with Real Madrid, he starts his adventure in the NBA after being chosen number 3 in the draft and becoming the best player in Europe at just 19."

Economic strength
"We are the club with the most revenue from any sports institution in the world. This allows us to compete to be leaders in an increasingly tough and demanding international market. Every year we beat our own revenue record. Over the past season, 17-18, our operating income came to to 751 million euros, representing an increase of 11.3% on the previous year. During the 2000-2018 period, revenues have grown at an average annual rate of 11%. "

"We have achieved economic stability with record numbers in our 116 years of history. Real Madrid’s marketing is the activity that gives us more revenue for the club and continues to set records. Revenue from our commercial activity reached 336 million euros last season. This means a growth of 16 percent in comparison with the previous season."

Our members
"We will now look at the Real Madrid club members, the owners of our destination. We currently have 93606 members and from the club we want to continue feeding the links between us and the sense of belonging to Real Madrid. We aim for greater service and look to facilitate contact with our members, the members’ assistance office at the Santiago Bernabéu is still open, as well as the new one that has been opened in the new office building constructed over at Real Madrid City".

Real Madrid Foundation
"There is no greater commitment than we have in this club for solidarity with those who need our help, especially any children who suffer anywhere in the world. The Real Madrid Foundation is the biggest non-profit organization that educates in values through sports around the world. Throughout our years of history at the Foundation, we have changed the lives of about 900,000 children. Everything we do still seems small to us. We are currently in 80 countries with more than 900 projects. "

Our media presence
"We continue to be the institution, the brand, the sports institution with the largest global audience. The Real Madrid social networks now have more than 300 million followers. We are the club with the highest number of followers around the world and with the most followers across social networks. Realmadrid.com is still the most visited club website in the world and our television channel has been broadcast for two years throughout Spain in HD quality. Every day about 1 300 000 viewers view it. " 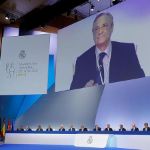