James: “Real Madrid is a unique club, from another world”
“Being here is something great and unique. Winning the Champions League again with this shirt. It's nice, above all because it has the badge that we will wear with pride and desire”.

“Real Madrid is a unique club, from another world. Playing alongside big stars is great and I hope to gradually get better".

Bale: “We want to make history by winning the Champions League again”
“Winning the club's tenth title was fantastic for everyone. Scoring a goal in the European Cup final is one of my biggest dreams and it was a good season for the team. I felt fulfilled”.

“We have to look to the future and try to win it again. We want to make history by winning the Champions League again. We know there is always a lot of pressure on us, but we like it and we want to win more titles this year”.

Casillas: “We have a spectacular and more mature team”
“We experienced it with the strength we have always had. We came very close to one or two more finals, but in the end we won our tenth European title last season. Both the bird and the dragon symbolise the resurgence of recent years and strength for the coming season”.

“It's difficult to defend the title, but we have more desire and determination than last year. We have a very good squad and a spectacular team, which is also more experienced and more mature”.

"I love the shirt. It's innovative, ground-breaking and yet simple. I'm certain people will like it a lot and hopefully the dragon will give us plenty of strength”.

The symbology of the interweaved dragons
Designed with the innovative Adizero™, the black shirt ensures maximum performance and its ultra-light fabric allows freedom of movement and comfort without compromising on elasticity and durability. The two mythical beasts in white that appear interweaved on the torso are striking. One is the dragon king, a symbol of the greatness, glory and power of the club, while the bird dragon, which is an animal capable of adapting to the most hostile situations, represents the resilience, determination and ability of this centuries-old club on its path to victory. 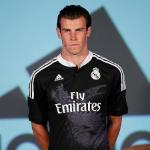