The Real Madrid C. F. Board of Directors, which met on 12 September, has agreed to convene an Ordinary General Assembly for 2 October 2022, during which, among other matters, it will submit for approval the results for the 2021-2022 season. 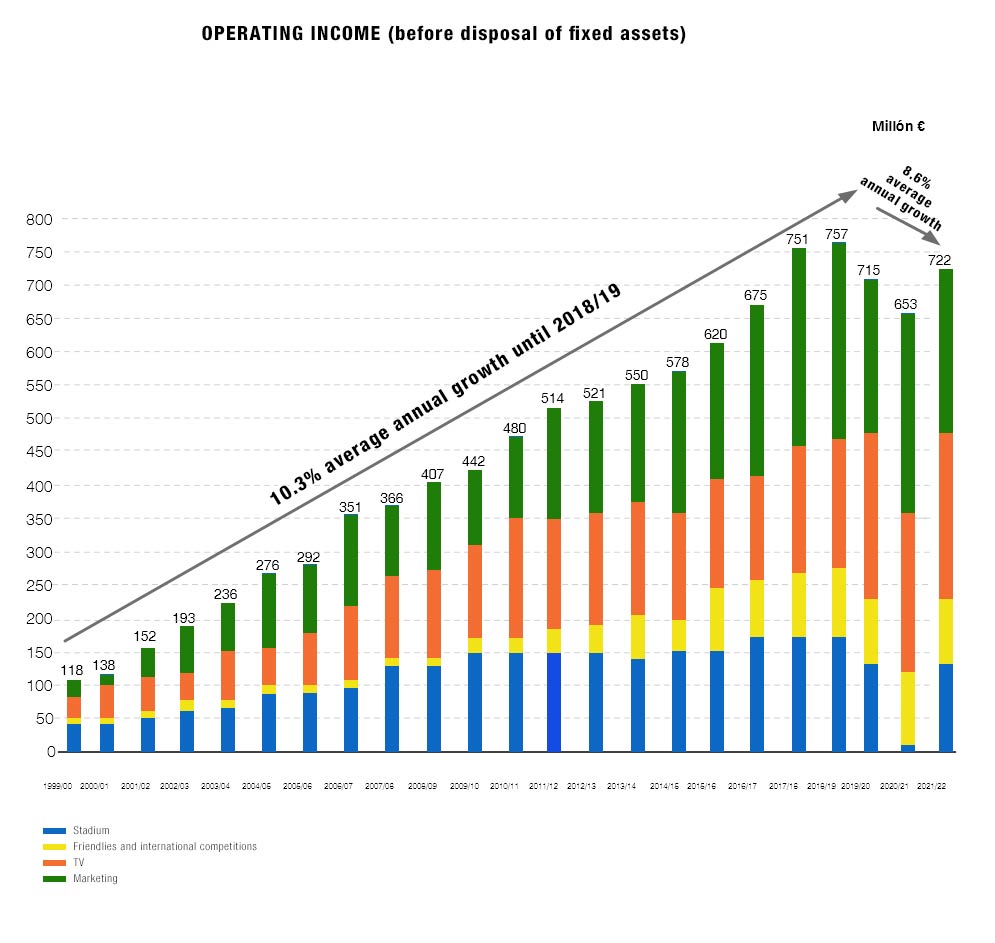 Operating income for the financial year 2021/22 has reached €722 million, an increase of €69 million (10%) year-on-year, as the economic effects of the pandemic are gradually subsiding.

These effects are still lingering, however, which is why the revenue figure for this financial year 2021/22 is still lower than it was four years ago in 2017/18 and is € -100 million lower than the 2019/20 budget before the pandemic.  The loss of revenue that the Club has suffered in its business lines from March 2020 to 30 June 2022 is close to €400 million compared to the pre-pandemic situation, in addition to the loss of new revenue that could have been generated had the pandemic not struck. 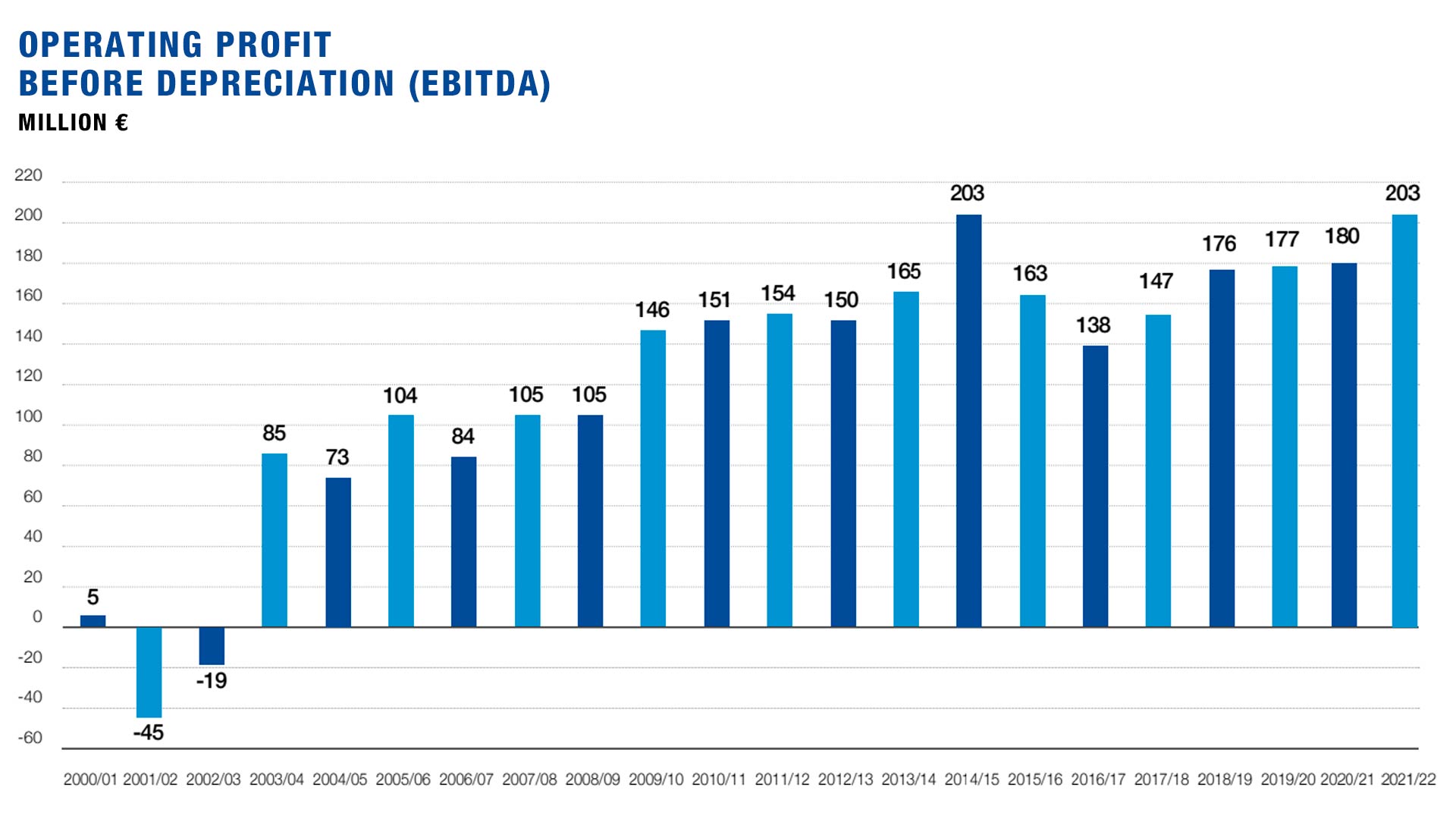 As indicated above, income for the year continued to be significantly affected by the effects of the health crisis brought about by Covid-19. In addition to this, the stadium's income was affected by the limitations in place due to the redevelopment work. Against this background, the Club's management has continued to focus on cost containment and on actions to improve management and business development in all areas, highlighting the capital gain realised in the year from the agreement with Sixth Street/Legends.

As a result, over the three financial years affected by Covid-19, and despite the loss of income it has caused, EBITDA has been higher than that generated in 2018/19 before the pandemic, which is a sign of the Club's operational efficiency, as well as its ability to respond by adopting management measures to mitigate these losses.

A €13 million profit is achieved after deducting depreciation, financial result and corporate tax expense. This result means that the Club has managed to remain in profit over the three financial years affected by the pandemic, making a profit in both 2019/20 (€313 thousand after tax) and 2020/21 (€874 thousand after tax), being one of the few major clubs in Europe that did not incur losses over those two financial years, given that, based on a study by UEFA, the accumulated operating losses of European clubs between 2019/20 and 2020/21 are close to €6 billion. 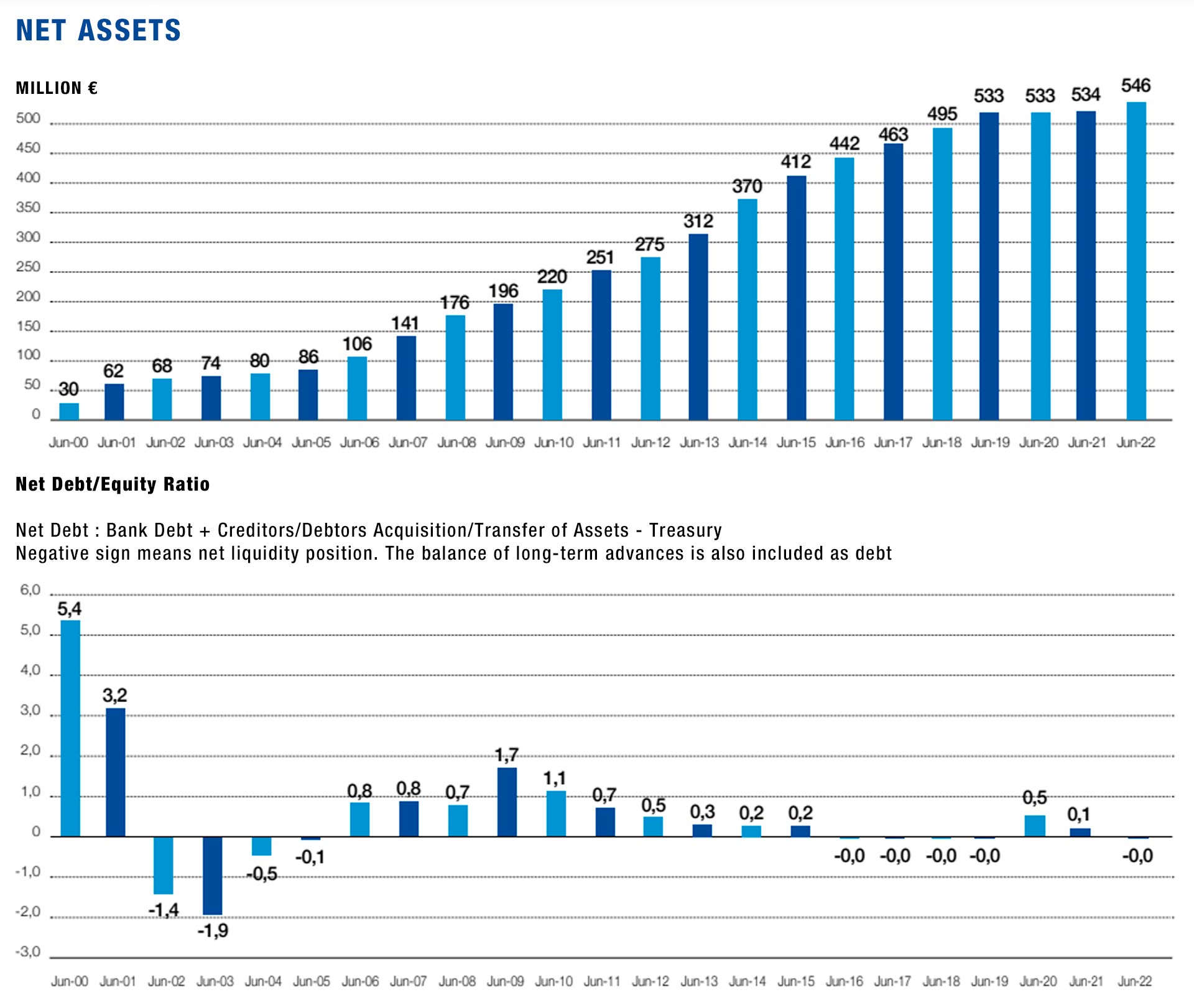 The Club's net asset value has increased year on year as a result of the profits made, reaching a value of €546 million as of 30 June 2022. As a result of staying in profit in the three years affected by the pandemic - 2019/20, 2020/21 and 2021/22 - despite the loss of income suffered, the Club has managed to increase the value of its net assets by €14 million in comparison to the pre-pandemic situation as at June 2019. 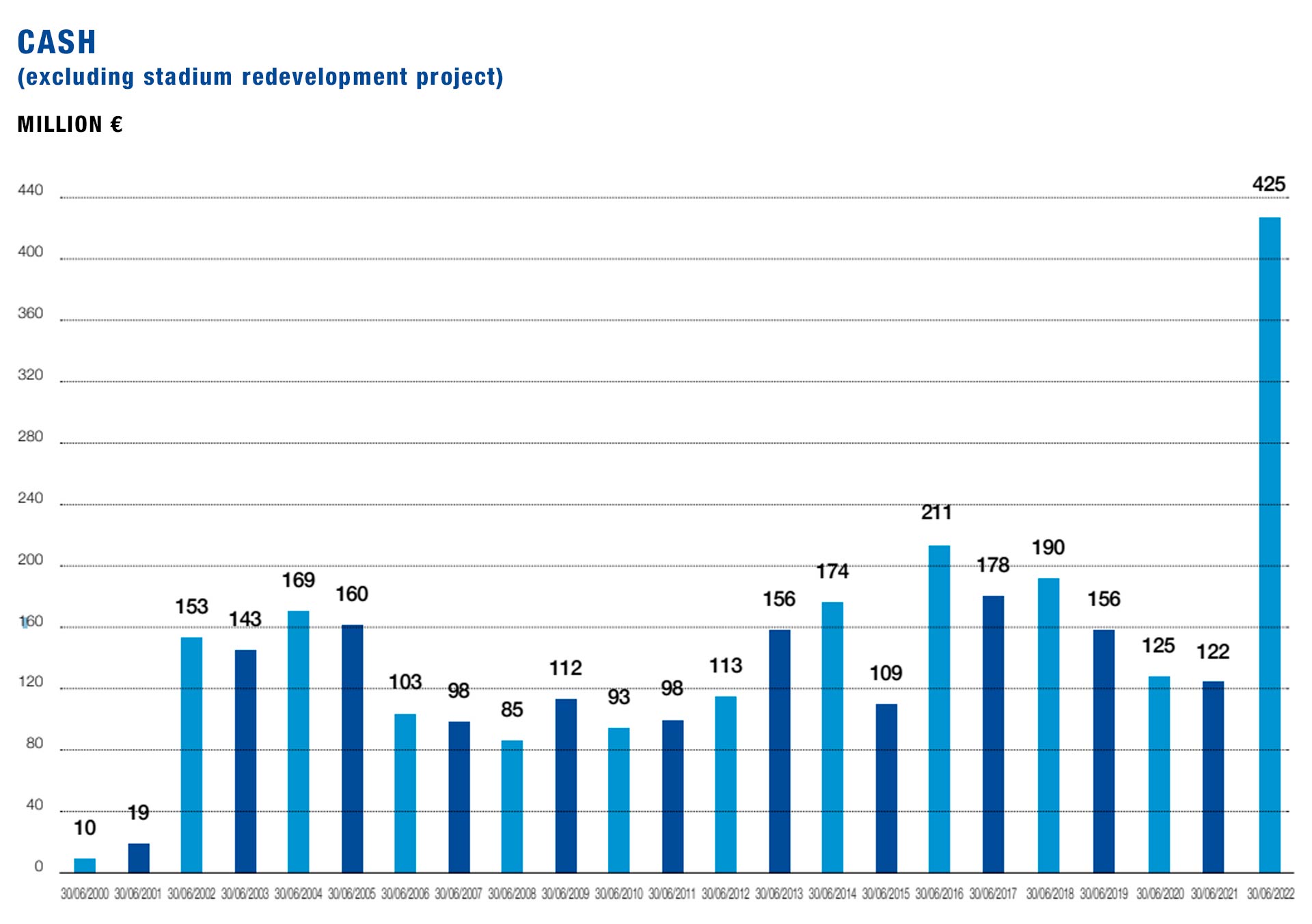 The cash balance at 30 June 2022, excluding the stadium redevelopment project, is 425 million euros.

This high cash balance has been achieved thanks to both investment and cost containment measures and business development activities, highlighting the impact on cash for the year of the capital gain from the Sixth Street/Legends agreement.

As a result, the Club has been able to offset the cash impact of the €400 million loss of revenue caused by Covid-19 from March 2020 to date.

Furthermore, the Club has undrawn credit facilities of €354 million as at 30 June 2022, which further strengthens its liquidity position to comfortably meet all expected payment commitments. 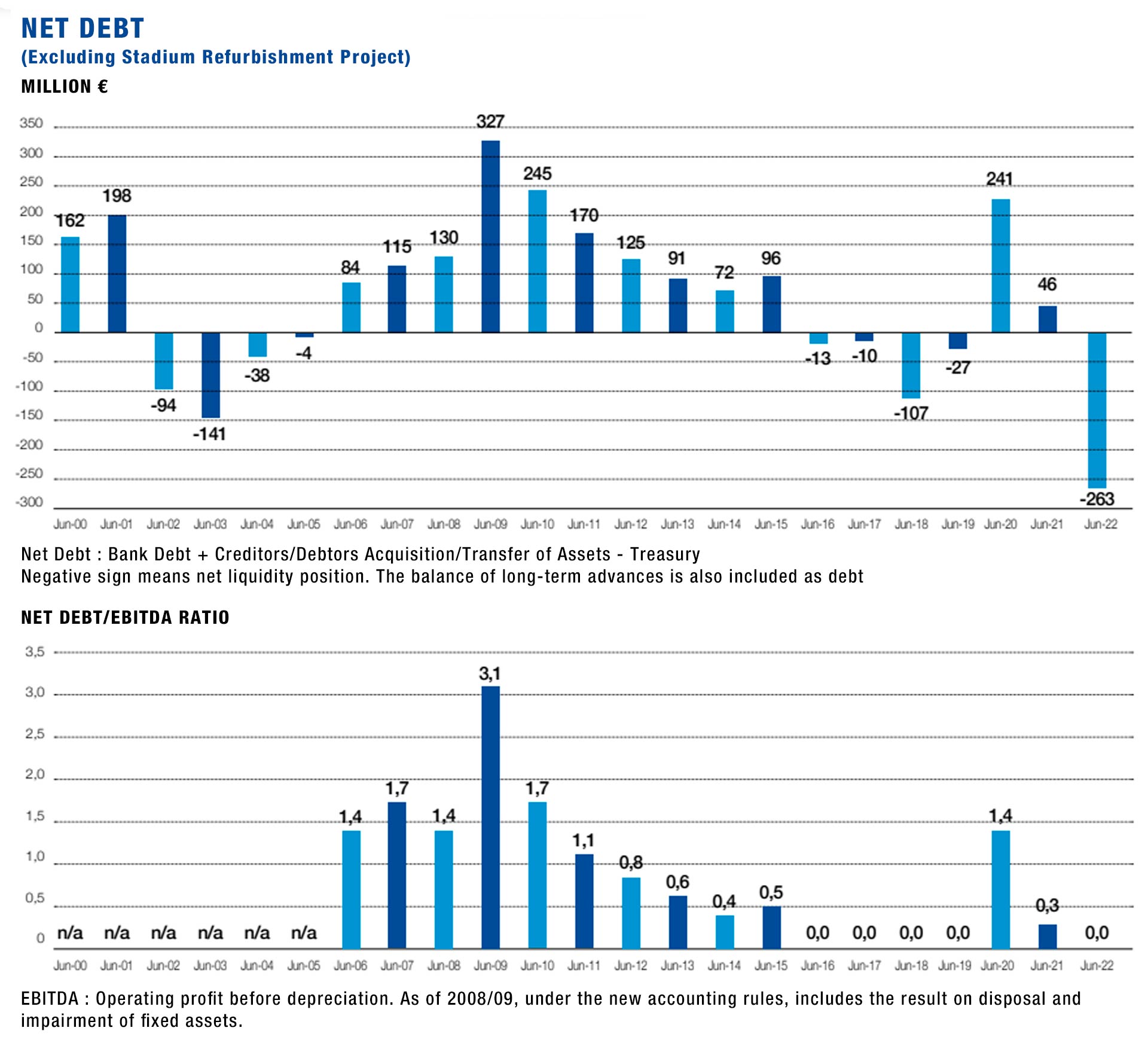 The Club's Net Debt, excluding the stadium redevelopment project, has reached a value of -€263 million as of 30 June 2022. This amount actually represents not a debt but a net liquidity position, as the sum of cash and transfer debtors is greater than the credit balances for investments, bank debt and advances.

The Net Debt as of 30 June 2021, excluding the stadium redevelopment project, was a value of €46 million, which means that during the financial year 2021/22 the Club has reduced its net debt by -€310 million.

In comparison to the situation before the pandemic (30 June 2019: net cash position of -€27 million), the net debt as at 30 June 2022 is -€237 million lower, which shows that the Club has managed to compensate, through the implemented savings measures and other business improvement actions, the loss of revenues of close to €400 million caused by the pandemic and its consequent impact on lower cash flow and therefore higher net debt.

All this data demonstrates the robust equity position and high solvency that the Club has despite the pandemic.

Real Madrid's contribution to Tax and Social Security revenues in the financial year 2021/22 amounted to €351.2 million.

The amount of the investment accounted for in the financial year 2021/22 was €259 million, including the financial costs capitalised during the construction period. The accumulated investment until 30 June 2022 thus amounts to €538 million.

This is a result of some lingering effects on income due to the deferred impact of the economic crisis resulting from the pandemic, in addition to the economic challenges caused by the ongoing conflict in Ukraine.

Furthermore, throughout the 2022/23 financial year, the Club continues with the implementation of the Stadium remodelling project, which will not be fully operational in terms of revenue until the works are completed. 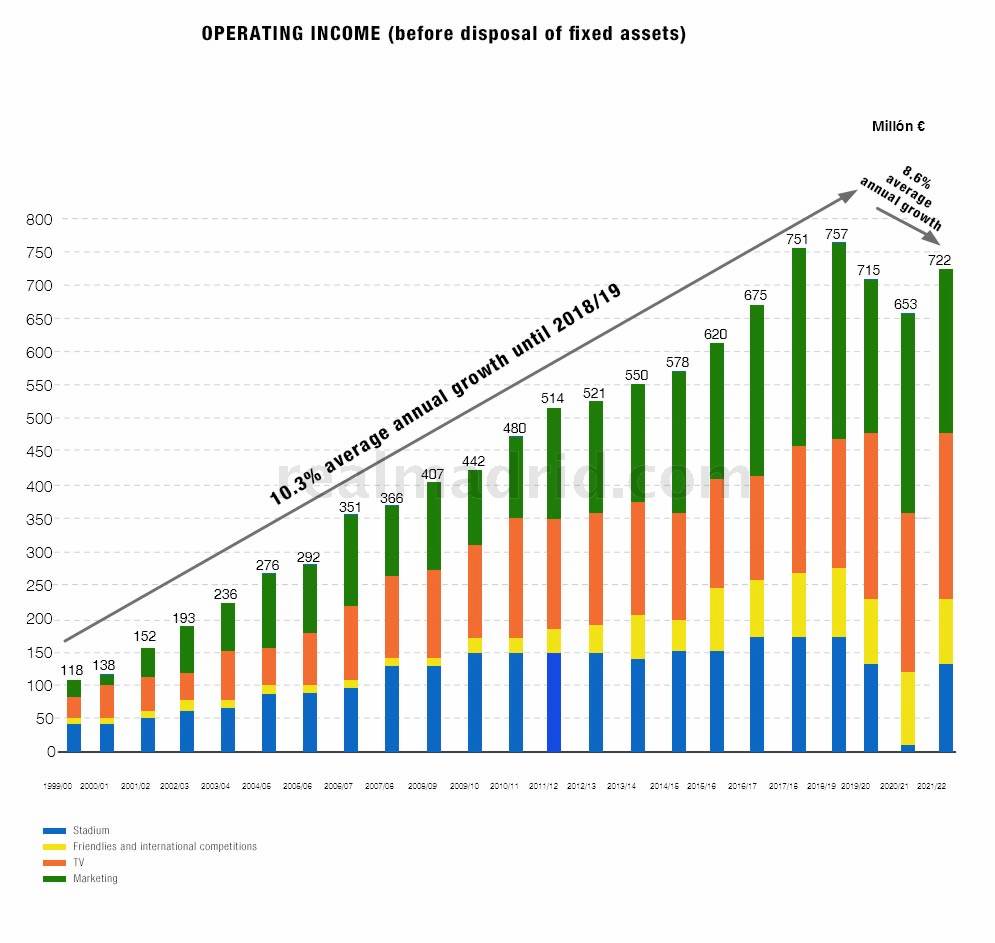 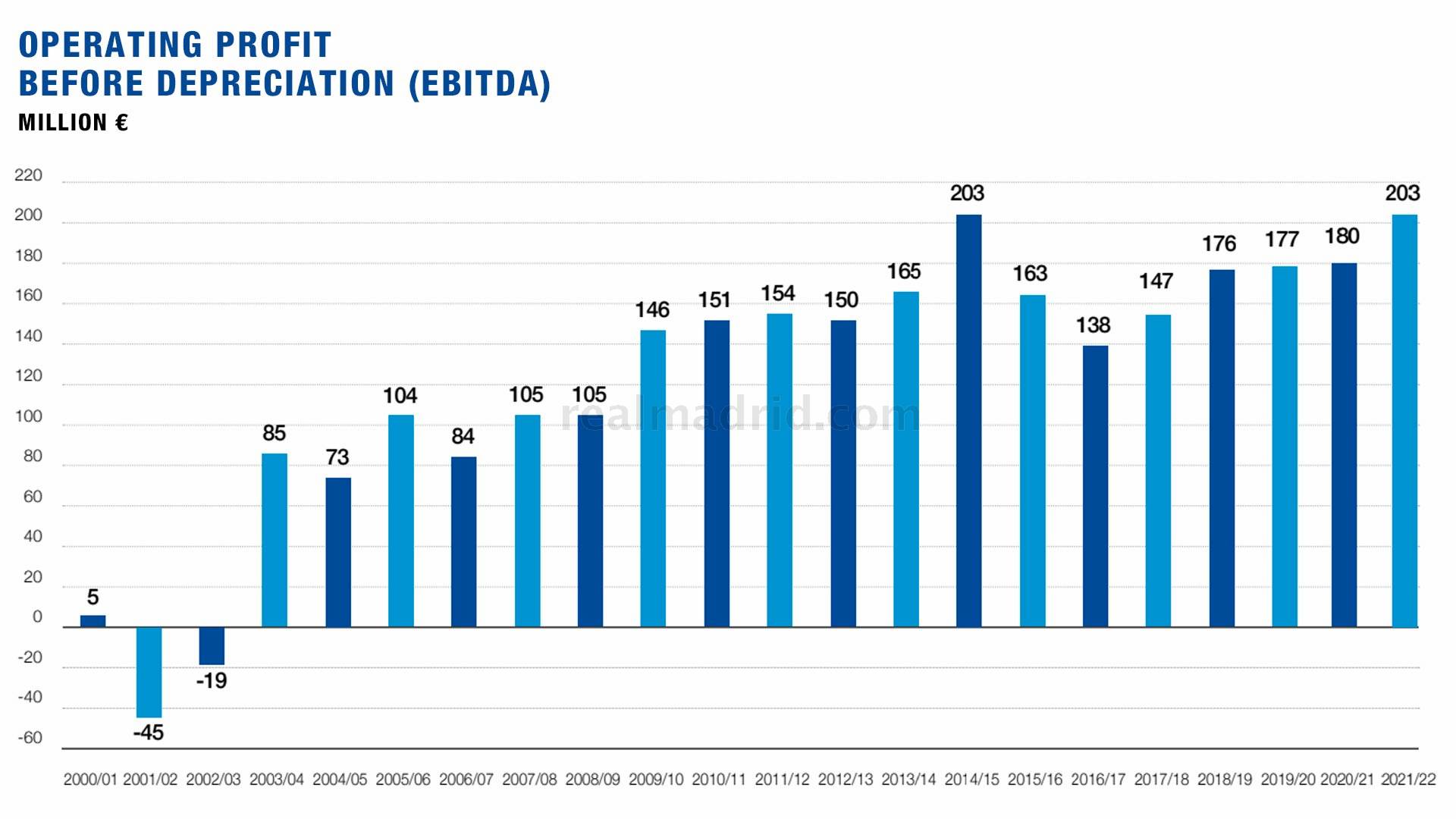 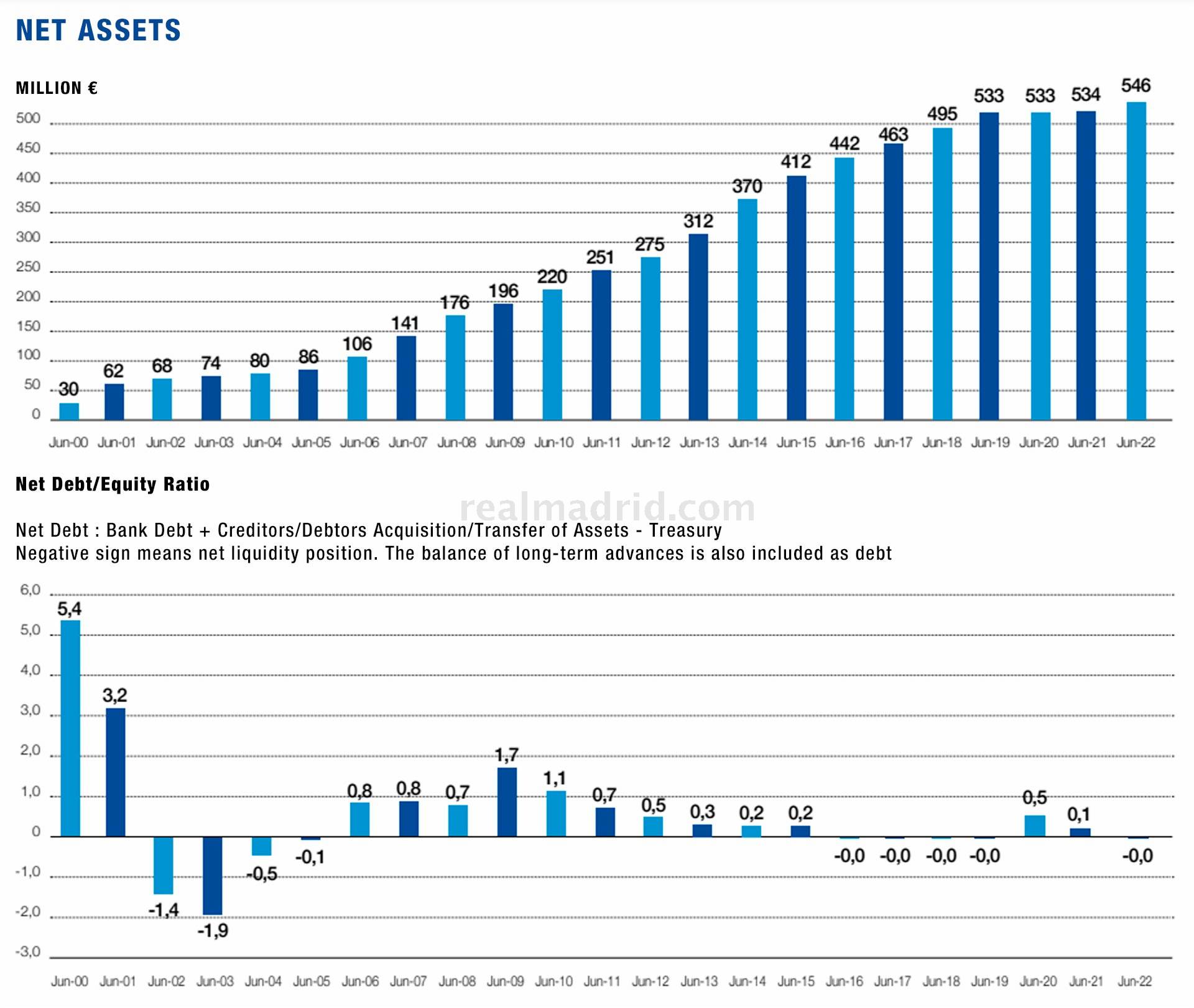 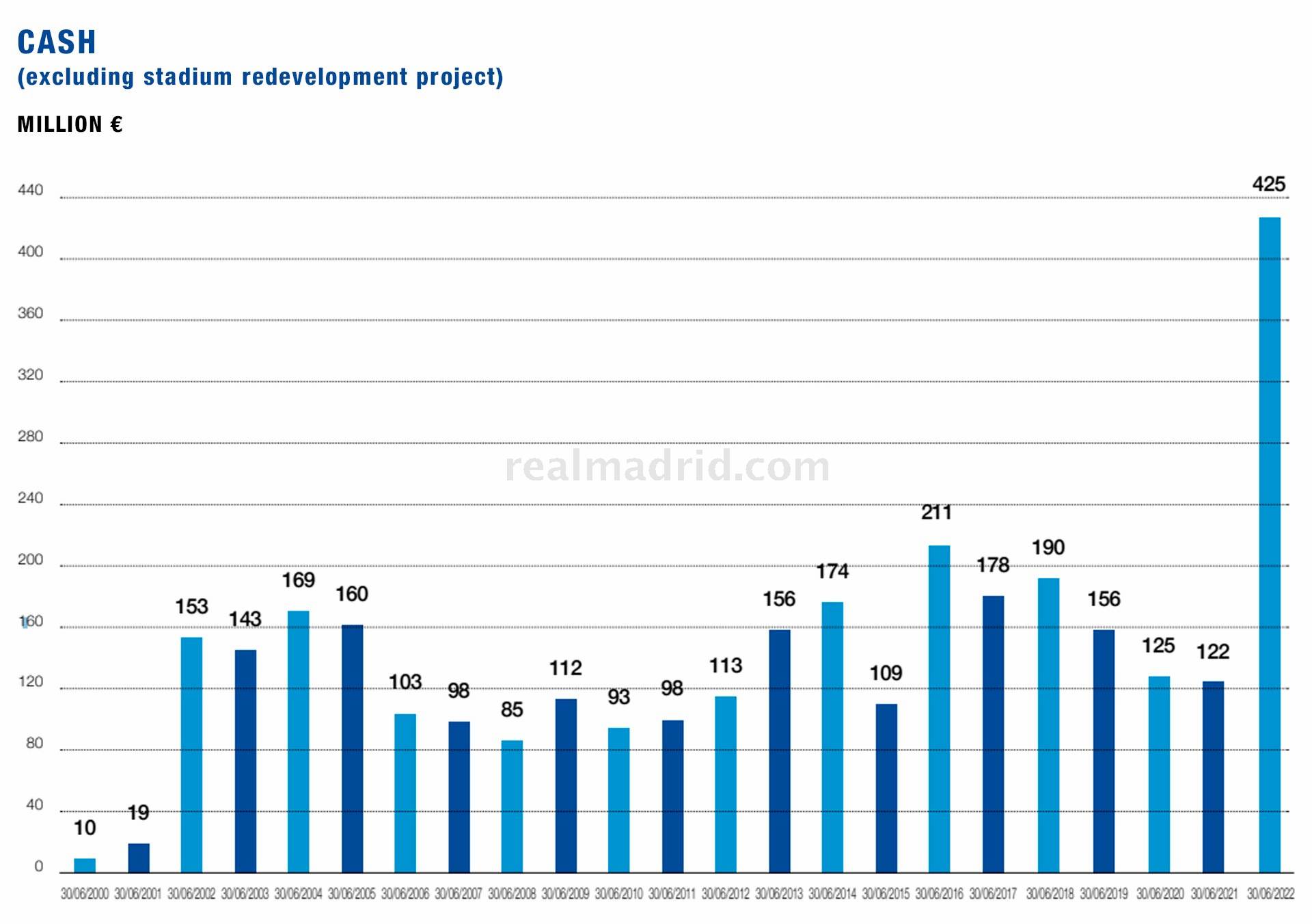 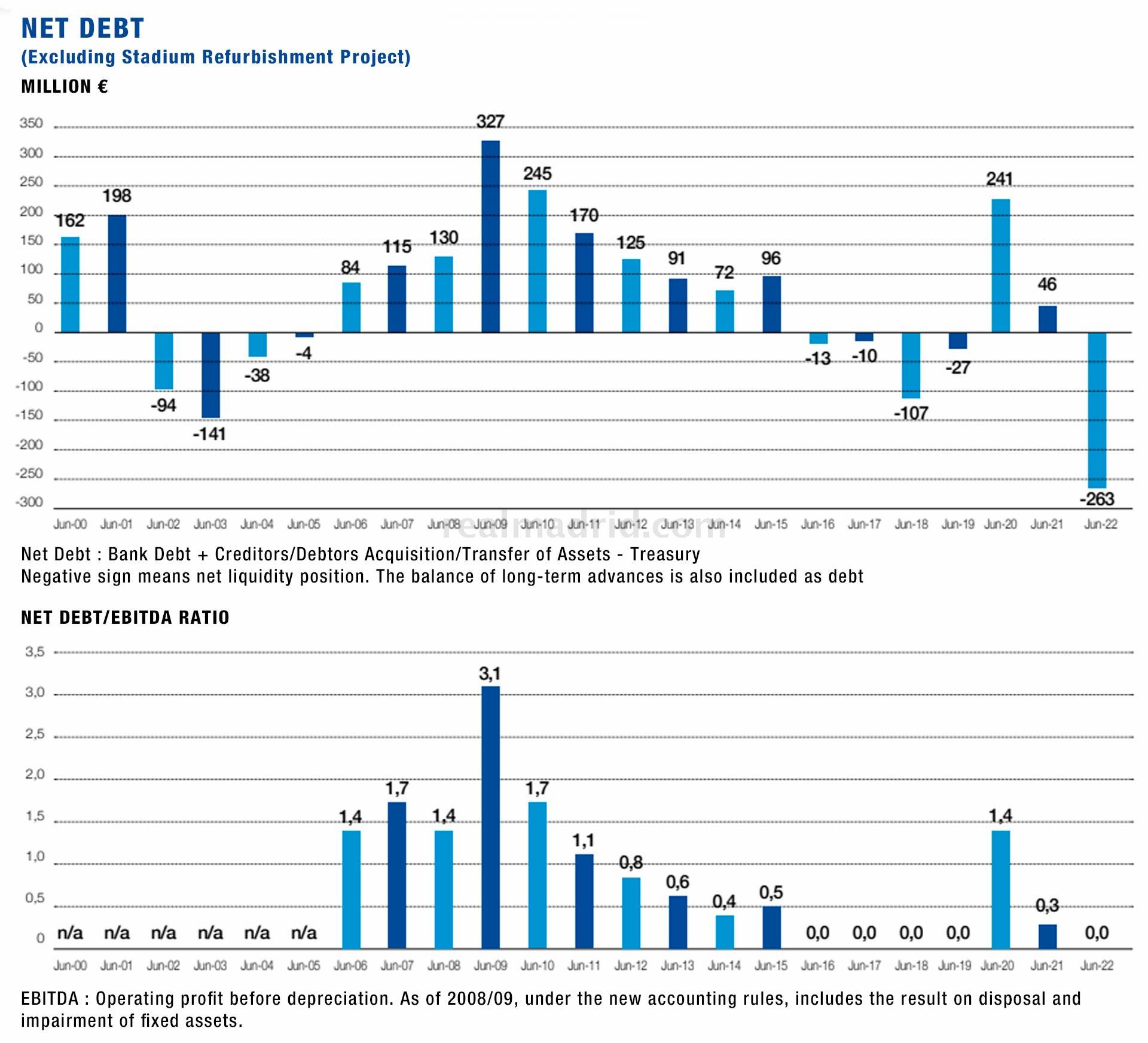