Rodrygo struck the Whites' goal from a free-kick in a game that saw Hazard, Mendy, Jović, Kubo, De la Fuente and Javi Hernández all make their debuts.
NRG Stadium (Houston)

1
Real Madrid got their 2019/20 campaign up and running in Houston as the Whites produced a performance that was deserving of more, particularly in the opening 45 minutes, with the team showing some exciting signs in this, their first pre-season run-out. The first half was played at a rip-roaring pace and we weren't made to wait long before seeing the first of the goalmouth action. The madridistas came close to getting their noses in front in the 11th minute, when Isco found Luka Modric, whose devilish cross was met in the six-yard box by Karim Benzema, but between them Joshua Kimmich and Manuel Neuer managed to scramble the ball away.

Just four minutes later, in what was a near carbon copy of this move, Bayern made the breakthrough. Kingsley Coman's pull-back picked out  Corentin Tolisso, whose effort struck Marcelo on virtually the goalline, but the rebound fell kindly to the French midfielder to slam the ball home from close range. It didn't take Real Madrid long to muster a reaction. In the 18th minute, Marcelo swung in a cross and Sergio Ramos's powerful header zipped across the six-yard box, where nobody was on hand to apply the finishing touch. Six minutes later, Benzema tried his luck when he spotted a gap between three Bayern defenders and unleashed a driven effort that was excellently turned away by Neuer.

Real Madrid continued to probe in search of a leveller. In the 34th minute, Hazard sent over a cross with which Benzema failed to connect properly, whilst Marco Asensio's follow-up effort was gathered in by Neuer. The Whites again came close four minutes later. On this occasion, Hazard picked up the ball wide on the left and he drove into the box, with the ball glued to his feet, before conjuring up a curling effort that was palmed away by the Bayern goalie. Madrid had done more than enough to have scored, but Bayern also posed a threat and Jann-Fiete Arp saw his effort strike the woodwork in the 39th minute. The final chance of the opening half, which came right on 45', went the way of the madridista, with Modric's shot again forcing Neuer into a smart save.

Rodrygo curls home a peach
Zinedine Zidane fielded a completely new XI after the break. After Hazard had made his debut, it was now the turn of Mendy, Rodrigo, Jović, Kubo, De la Fuente and Javi Hernández to make their bows. In the 62nd minute, Kubo picked out  Vinicius Jr with a delicious pass but the forward failed to outfox Bayern's custodian in the one-on-one. Bayern put the game beyond Madrid's reach in two attack, which came virtually one after the other, with Robert Lewandowski striking with 62 minutes on the clock, before Serge Gnabry further extended Bayern's lead five minutes later.

Real Madrid kept plugging away right until the end and in the 80th minute, Rodrygo capitalised on a misplaced  Kimmich pass to bare down on Sven Ulreich, who received his marching orders after felling the madridista attacker outside the box. Rodrygo picked himself up and fired home a sublime free-kick that nestled in the top corner. The Whites are back in action on Wednesday, when Arsenal are the opponents at Washington's FedExField (1am CET;  Realmadrid TV). 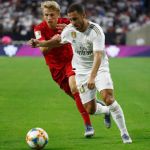