A 22-year-old full-back and Spanish international, he's been with the national team at the Russia World Cup and was included in the uefa.com LaLiga breakthrough team 16/17.
Álvaro Odriozola (San Sebastián, 14/12/1995) is a new Real Madrid player. The European champions have strengthened their ranks with one of the continent's most promising young defenders. A right-back known for his lung-busting runs, he has been at the World Cup in Russia with the Spanish national team, and his pace and ability to overlap are some of his significant assets. In the 2017/18 campaign, Odriozola made 35 LaLiga appearances for Real Sociedad, providing 4 assists and recording more crosses into the box than any other player in the team. He also made his competitive European debut, playing 6 times in the Europa League and bagging his first goal against Salzburg.

Cutting his teeth in the Basque side's academy, he made his debut in the 2013/14 season, also seeing competitive action in the UEFA Youth League with the B team. The turning point in his career came with his first-team debut in January 2017. Since then he's enjoyed a meteoric rise to the top, becoming a key piece in the Real Sociedad side which finished the 2016/17 LaLiga campaign in sixth spot. He played 16 times during that season (15 in LaLiga and 1 in the Copa) and was included in the LaLiga breakthrough team of the season on uefa.com.

Spain debut
Just as at Real Sociedad, his international career also started with a bang. He made his Under-21 debut in March 2017 in the clash with Denmark, providing two assists. In October the very same year he then made his first appearance for the full national side, setting up another goal in a meeting with Albania. It was Lopetegui who gave him his chance, and he also included him in his 23-man squad for the World Cup in Russia. He netted his first goal for Spain in one of the two warm-up matches for the tournament, a wonderful volley from the edge of the box against Switzerland. 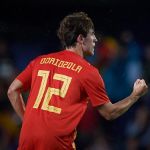