“Nivea Men is a historic brand and a great ally that has helped us extend the passion for Real Madrid”, said Florentino Pérez.
The presidential box at the Santiago Bernabéu stadium hosted the presentation of the global sponsorship agreement between Real Madrid and Nivea Men. The event was attended by President Florentino Pérez; Stefan F. Heidenreich, CEO of the Beiersdorf group; Thomas Ingelfinger, member of the Executive Committee for Europe of Beiersdorf; José Ángel Sánchez, general director of Real Madrid; Enrique Sánchez, secretary of the Board of Directors; and Emilio Butragueño, director of Institutional Relations.

Florentino Pérez was the first to speak: "We work every day to continue being the greatest sporting reference in the world. Something that forces us to choose our companions very well. Nivea Men has become one of those great allies, who have helped us extend the passion and love for Real Madrid. Nivea Men is a historical brand, leader, of prestige and quality, with which we established a strategic agreement in 2013".

Strategic alliance
"The actions carried out during all this time have seen that alliance that began focusing on Spanish territory, today become a great international agreement and Nivea Men is one of our great global sponsors. An increasingly solid union that strengthens the image of our institutions around the world".

"It has been a strategic, loyal and successful alliance of which we are totally satisfied and of which we are very proud. With Nivea Men we have shared all the successes of the previous years. Thank you very much for your trust, loyalty and for choosing Real Madrid as part of your identity".

More than 70 countries
Stefan F. Heidenreich also expressed his satisfaction: "This agreement will be for more than 70 countries around the world. Four years ago we signed a sponsorship agreement in Spain, which was extended to more countries. During this time, Nivea Men and Real Madrid have played the perfect game".

Finally, Thomas Ingelfinger said: "Today we begin a new chapter in this story that began four years ago. We have enjoyed a successful partnership that has evolved to make Nivea Men a global sponsor of Real Madrid". 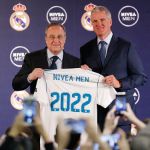