The youngster got to enjoy the Granada match with his father and brother.
Uosama Alabed Almohsen and his sons, Zied and Mohammad, got to enjoy the Real Madrid vs. Granada clash in the Bernabéu. The family of Syrian refugees was in attendance to watch the encounter in the flesh, on the invitation of the president, Florentino Pérez. Before the game started, little Zied walked out onto the pitch hand-in-hand with his hero, Cristiano Ronaldo, as the crowd applauded and cheered. As well as that, both teams came out onto the pitch wearing t-shirts of support that bore the slogan El fútbol profesional con los refugiados (Professional football stands with the refugees).

Over the last few days the family members have had some unforgettable experiences. On Thursday they were greeted by Florentino Pérez in the Santiago Bernabéu and on Friday they got to meet the players and the technical staff in Ciudad Real Madrid. From the very beginning, the club has leant its support to the refugees taken in by Spain and, to this end, on 5 September an announcement was made regarding the plan to donate one million euros towards this cause. 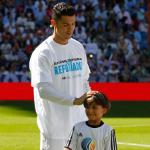