The Hungarian forward is one of the best defenders in Europe and in the last league season he averaged a 50.7% success rate in 3-pointers.
Adam Hanga (12-04-1989; Budapest, Hungary) has joined Real Madrid for the next two seasons. Hanga is an experienced and versatile small forward, who can also play point guard and shooting guard and has the athleticism to defend against any opponent. He averaged a 50.7% success rate in three-point shooting in the previous campaign, while his strength and speed allow him to penetrate the opposition defence.

Madrid's new addition is first and foremost a team player, but he is also capable of scoring, rebounding, assisting and stealing balls. The Hungarian has been performing at the highest level for a decade and has displayed great consistency. In the ACB he averages 8.6 points, 3.6 rebounds, 2 assists, 1.2 steals and 10.5 in PIR.

Experience in the ACB League
After making his debut in the 2006-07 season with Hungarian side Albacomp and excelling in his home country, Hanga landed in the ACB. At Manresa he developed into the team's leader in 2012-13 with averages of 11.7 points and 13.8 in PIR. He then signed for Baskonia, enjoyed a season in Italy and returned to Vitoria. He averaged 10.5 points per game in the EuroLeague in his last year in the capital of Alava, and was voted the best defender in the competition and named in the best team of the ACB. Between 2017 and 2021 he played for FC Barcelona and will play for the Whites for the next two seasons. 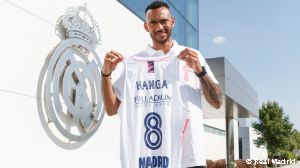