"When you sign for a club like this, you've only got one objective in mind: to win", said the madridista recruit.
Nigel Williams-Goss sat down with the club's official channels to give his first interview as a Real Madrid player and he expressed his excitement at having joined our club: "I didn't initially believe it, it was an incredible situation. Real Madrid is obviously the best possible place for me in Europe. When the opportunity arose, I was so excited and almost couldn't believe it".

"It's amazing to be playing for this team and at Europe's most decorated club. It's an honour and that's why I have to make sure I'm in good shape. I'm a team player who likes to win, above all else. That's why I think this is the perfect place for me".

Stability
"One of the things that really struck me about Real Madrid is the club's ability to keep hold of players for five, six, seven or more years. That's pretty rare in Europe, where there's usually a lot of turnover year on year. It's a club where there's great stability and that explains the team's success. I'm really happy to be part of this organisation and its culture".

Contribution to team
"I bring a youthfulness to the team. I'm a young player and am just 26 and have a lot of energy to offer. The standard is so high in the EuroLeague, so I will bring my competitiveness and desire to win a first major trophy. I'm raring to show that out on court".

Adaptation
"I'm a point guard who likes to play at a high tempo and make my teammates better players. I'm able to operate in several positions. Obviously, when you join a club like this one, you've got to be capable of adapting and playing with some really talented players. I think that my game will fit perfectly within the team".

Versatility
"I can play at number one or number two. I'm a player who's capable of doing what the team requires of me at all times. I'm capable of scoring, getting up and down the court, defending against the best players in the perimeter... I'm a really versatile point guard. When you play alongside players like these you have to find your place. I'll be delighted to contribute whatever the team needs of me".

"I'm so excited to be returning to the EuroLeague after my first year at Olympiacos, althoguh I had the chance to return to the NBA with the Utah Jazz. I'm delighted to be beginning my second stint in Europe because I feel as if I learned a great deal in my first spell and it prepared me for what lay ahead. We're now a few years on and I'm now really excited and this experience will stand me in very good stead".

Career
"I'm now feeling stronger than ever, the experience of playing in the EuroLeague, in the NBA and ending last season at Lokomotiv and in the Russian league all gave me added experience. I have to keep working hard this pre-season and come back even stronger".

Trophies
"When you join a club like Real Madrid, you've just got one objective in mind: to win trophies, such as the ACB, the Copa del Rey and the EuroLeague. The target is to win trophies. It will require us to work hard and we have to get down to work right away, now druing pre-season".

Mentality
"The only numbers I want to hear anything about are the number of trophies. Players at clubs like this one are strong individually, but the difference between a good player and a great player is the ability to win games. That's why I never pay any attention to individual statistics, for me it's all about winning".

Quality of roster
"Real Madrid has some very good players with a lot of experience. I'm delighted to be joining this group. I know the players who've been here for many years as I came up against them a couple of years ago with Olympiacos. I'm delighted to be part of the team and can't wait to play with all of my teammates".

Pablo Laso
"When you look at the career that Pablo Laso has had and how he has improved the players he's worked with, many of whom are currently amongst the best players in the game. I'm thinking of the case of Campazzo, and just how much he's improved here or any other player or point guard that Laso has done the same thing with. This is a big oportunity for me and I can't wait to learn as much as possible".

Message for the madridistas
"Many thanks for your welcome to the team and the club. I can't wait to get going and fight for every trophy. Hala Madrid!” 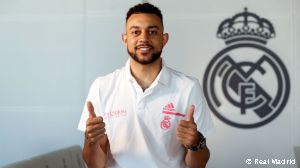