On 22 June 1947, Real Madrid successfully defended its crown following victory over Espanyol.
Seventy-four years ago today, Real Madrid lifted the club's ninth Spanish Cup trophy as the team reclaimed the crown secured in the previous edition. The Whites faced Espanyol in the 1947 final and ran out 2-0 winners in a contest played at Riazor. The showpiece proved to be an even affiar and the game was ultimately decided in extra time. Our team claimed glory in the second half of extra time courtesy of strikes from Vidal and Pruden. 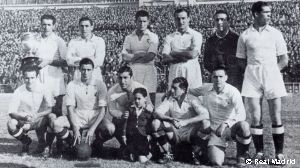