A win at the Alfredo Di Stéfano would send Zidane's team top of the table (9:00pm CEST).
Alfredo Di Stéfano plays host to a season-defining clash in LaLiga this evening. Following yesterday's draw between Barcelona and Atlético, Real Madrid have the chance to shoot to the top of the table if they get the better of Sevilla on matchday 35 tonight (9:00pm CEST). Zidane's men sit three points off the summit thanks to their superior head-to-head record against the rojiblancos.

It's the first of four finals in the fight for the LaLiga title. Our team will be hoping for a continuation of their fine form in domestic competition, where they have not lost in any of their last 14 games. In the first meeting this season, Madrid took three points at the Sánchez-Pizjuán, and the last 11 league encounters on Madrid soil have gone the way of the madridistas.

“We know what's at stake and the important thing is that we give it our all”, said Zidane in the pre-match press conference. Casemiro is up against his favourite opposition in goal-scoring terms for Real Madrid (3 goals in his last 2 games against them at the Bernabéu) and he's in the squad picked by the coach for the game. Sergio Ramos will miss out through injury.

Fourth place
Sevilla have already made sure of their presence in next season's Champions League and come into the game sitting in fourth place on 70 points. Alongside Atlético, Barcelona and Real Madrid, they are still in with a mathematical chance of winning the LaLiga title. Last time out though, they were unable to find a way past Athletic, seeing them drop 6 points off the lead. En-Nesyri is their greatest attacking threat with 17 goals so far this season. 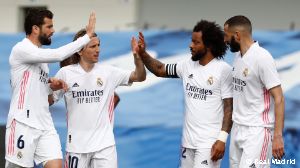