The reserves move up to third after beating Badajoz thanks to a brace from Arribas and a goal from Hugo Duro.
Alfredo Di Stéfano

1
Castilla put in a great performance in the fifth game of the second phase against the group leaders. Raúl's side overcame Badajoz and moved up to third in the table and with their fate in their hands going in to the final game, with a place in the Segunda Division promotion play-offs at stake (next weekend away to Talavera). Arribas' was in spectacular form with two superb goals, one from the centre of the pitch and the other from a direct free-kick. Hugo Duro scored from the penalty spot in the second half.

Castilla went in search of goals from the off. Hugo Vallejo tried his luck with a solo effort before the Arribas show kicked off after ten minutes. Peter cut out a pass in midfield, fed Arribas who struck the ball from just inside the opposition half and beat the Badajoz keeper to put the reserves ahead. A great goal. It wasn't long after that the bad news arrived. With 20 minutes gone, Latasa suffered an injury, being replaced by Hugo Duro, and in the 25th minute Badajoz got the equaliser.

Double
Arribas then popped up again to make it 2-1 from a free-kick that once again caught out the opposition goalkeeper. Not satisfied with the brace, Arribas wanted to make it three in a quick succession, but his shot went just over. Hugo Duro extended the lead at the start of the second half, turning home a penalty that was awarded for a foul against him. Badajoz, looked for a way back in to the game and brilliantly forced Toni Fuidias into action as well as hitting the woodwork, but Castilla controlled the game well and have their fate in their own hands going in to the last game before the promotion playoff. 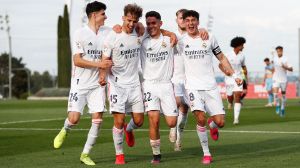 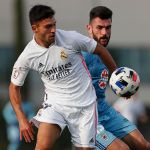