The academy side visit the team from Extremadura looking to extend their unbeaten run to nine games (12:00pm CEST).
It's a tough clash for Real Madrid Castilla today, as they head to Badajoz (12:00pm CEST) to face the Grupo V-C de la Segunda División B second phase league leaders. The academy side will be aiming for a win at the Nuevo Vivero which would see them remain in the upper echelons of the table.

Despite a draw in the previous meeting with Extremadura (1-1), Castilla looked in great shape in their first game of the second phase of the league season. Now, it's an even greater challenge up against Badajoz, who also lead the goalscoring charts with 34 so far this campaign.

The opposition
Badajoz lead the six teams fighting for a place in the play-offs for promotion to the Segunda División. The team from Extremadura are enjoying a superb season, having picked up 13 wins, five draws and suffered just a single defeat. They are particularly strong at home, too, where they are unbeaten in their nine games to date. 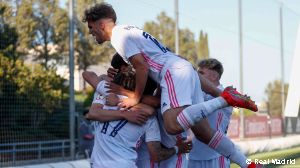