The captain has recorded 334 victories in the competition, 315 with Real Madrid and 19 with Sevilla.
Sergio Ramos has won the second most games in the history of LaLiga after the 2-1 victory over Elche. The captain has been on the winning side in 334 games in the league (19 with Sevilla and 315 with Real Madrid) and equals the record set by Casillas. Only Messi is ahead of him with 377 victories. 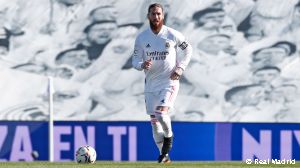