Zidane's charges travel to El Collao for the one-legged round-of-32 encounter (9pm CET).
Tonight sees Real Madrid enter another competition, the fourth the side has featured in so far this term, as the Whites open their Copa del Rey campaign against Alcoyano at El Collao in the round of 32 (9pm CET). This round is contested over a single leg, with victory the only option to advance to the last 16.

This will be the clubs' third meeting in the Copa. In their previous clashes, Real Madrid prevailed over Alcoyano in the quarter-finals of the 1945/46 edition and also came out on top in the round of 32 in the 2012/13 season, with both games played over two legs

"We've got to be ready because there's no such thing as an easy competition or match", insisted Zinedine Zidane in his pre-match press conference. Karim Benzema, who hit a brace in Real Madrid's last trip to Alcoy, takes his place in the 20-strong squad list named by the boss for the tie.

Segunda B Group 3
Alcoyano compete in Sub-group B of Group 3 in Segunda División B, where they currently lie third with 16 points to their name. The Blanquiazules have already beaten top-flight opposition in this season's Copa del Rey after sending Huesca crashing out following a 2-1 away triumph in the second round, a stage they reached after accounting for Laredo in their first outing in the competition. 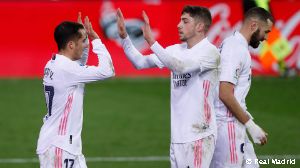