Gila put the Whites ahead in the first half, Atlético equalised on 90’ before Arribas won it on 94’, also from the penalty spot.
Cerro del Espino

2
Real Madrid Castilla claimed victory in the first derby of the season at Cerro del Espino (1-2). Raúl's side, who are now five games unbeaten, defeated Atlético B in a match that was decided in the final minutes. After Gila had opened the scoring early on, the hosts drew level on 90’ from the penalty spot, only for Arribas to snatch all three points for the Whites (1-2), with another penalty.

The first half was evenly balanced, with Castilla creating the first chance when Blanco's shot from the edge of the area was off target. The hosts responded immediately when a cross by Ricard was met by Nando at the back post and the latter's header from inside the six-yard box forced Fuidias into action with a fine save. The academy side then piled forward and in the 22nd minute the deadlock was broken. Arribas played a free kick to the back post for Gila to head to ball into the back of the net for the visitors. Three minutes later, Atlético almost equalised. Camello found himself one-on-one with Fuidias, but his effort was blocked by the keeper. In stoppage time, Castilla had the chance to double their lead when Arribas saw his effort cleared off the line by Medrano.

After the break, the visitors started well when Marvin's cross from the right on 50’ was met by Dotor, but he couldn't keep his effort down. Castilla then went close again six minutes later. A through-ball by Blanco picked out Hugo Duro, whose powerful strike sailed wide. Then it was the hosts' turn to press as they went in search of an equaliser and they almost managed to score on 65’. Camello floated in a cross and an unmarked G. Valera beat Fuidias from inside the six-yard box, only for Chust to clear the ball off the goal line.

A rollercoaster finish
Castilla seemed to be in control and looked certain to see the game out but the hosts drew level on 90’. The rojiblancos were awarded a penalty after a handball by Retu. Borja G. converted the spotkick, but the Whites were not satisfied with a point and in stoppage time they snatched all three points. Arribas was brought down in the box and brushed dusted himself down to make it 1-2 for Real Madrid Castilla. 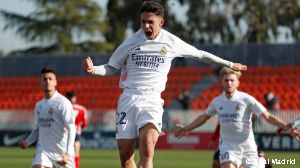