The captain played his 461st match and equaled Santillana's record.
Sergio Ramos has now made the fourth most league appearances in the history of Real Madrid, after today's game against Huesca. The captain, who has won the league title 5 times, played his 461th match and equalled Santillana's record. Ahead of him are the only three players who have played more than five hundred matches in the white shirt: Raúl (550), Sanchís (523) and Casillas (510). 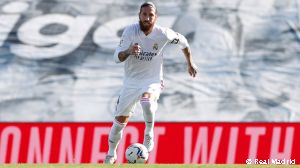