1
Real Madrid recorded a fifth LaLiga win of the season after putting Huesca to the sword at the Alfredo Di Stéfano. Zidane Zidane's side, who now sit top of the pile, set themselves up for victory by scoring two goals in the final minutes of the first half.  The hosts broke the deadlock courtesy of a spectacular strike from Eden Hazard, who fired home a powerful effort from outside the box. Fede Valverde and Karim Benzema, who notched a brace, later got their names on the scoresheet to round off a comprehensive win.

The first half was proving to be an even affair up until five minutes before the break as Madrid struck twice. The first goal was scored by Hazard. With 40 minutes gone, the Belgian, who was making his first start of the season, received a pass just past the halfway line, before driving on for a few metres and unleashing an unstoppable left-footed bullet that flew past the helpless Andrés Fernández. The goal spurred the Whites on and they duly double the advantage in the very next move. Lucas Vázquez played in a cross to the far post, where Benzema chested the ball down and slotted home his second goal in as many games with a left-footed effort that nestled in the far corner.

The success in front of goal from the madridistas, who have scored nine times in the three games played over the last seven days, continued after the break. Good link-up play between Hazard and Benzema in the 54th minute ended with the Frenchman crossing to the back post, where Valverde did the rest to make it 3-0. His touch to bring down the ball was perfect and his shot was unstoppable.

With the match under control, the Whites continued to create chances and after great individual work from Vinicius Jr., his left-footed cross picked out Benzema whose volley missed the target by inches in the 63rd minute. Huesca didn't throw the towel in and got one back with 75 minutes on the clock, thanks to Ferreiro's goal. However, that wasn't it in terms of the scoring as Benzema bagged the fourth in added time to record his first brace of the season. Marcelo crossed, Rodrygo provided the assist and the Frenchman added the finishing touch to make it 4-1. The result moves Zidane's side to the top of the LaLiga table as the attention now turns to the Champions League match against Inter Milan (Tuesday, 9pm CET). 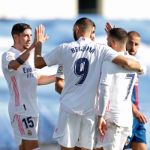