Modrić and Vinicius Jr. scored in the second-half for the madridistas, who came close to coming back from three first-half Shakhtar Donestsk goals.
Alfredo Di Stéfano

3
Real Madrid began the Champions League with a defeat at the hands of Shakhtar Donetsk at the Alfredo Di Stéfano stadium.  The first chance of the game fell to the hosts when Asensio fired a shot in at goal, but Zidane's side found themselves a goal down before the half-hour mark. Tetê made it 0-1 in the 28th minute after a fine piece of play by Korniienko. Jović had the chance to level two minute later after a great cross from Marcelo, but the forward's shot found the hands of the Ukrainian keeper.

The game then began to open up and the visitors made the most of their chances to double their lead in the 32nd minute. Tetê shot and Varane turned the ball into his own goal when trying to prevent Dentinho from scoring the rebound. Things went from bad to worse just before the break when Salomon made it 0-3 in the 42nd minute. After half-time, Madrid applied the early pressure high up the pitch and won the ball back quickly. The domination paid off when Modrić reduced the deficit with a fine strike from distance into the top corner (54').


Second Real Madrid goal
Four minutes later, Vinicius Jr. came on for Jović and scored with his first touch. The Brazilian won the ball back on the edge of the opponent's area and finished well. The match opened up and became an end-to-end affair as Real Madrid went in search of an equaliser which almost came in the 62nd minute after good individual play by Vinicius Jr. followed by a Benzema effort from inside the area, but Bondar kept the Whites out. Courtois was also at his best when he denied Tetê in a one-on-one just two minutes later.

The game was all to play for and Shakhtar defended deeper and deeper as the home side built up a head of steam. Real Madrid continued to probe, and Valverde turned home a set play in injury time which was ruled out by the referee after checking the move on the monitor as Vinicius Jr's was deemed to have been offside. The team now switch their focus to el Clásico. 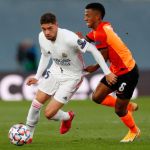