Goals by Valverde, Emerson (OG) and Ramos saw the reigning LaLiga champions past Betis after a second-half comeback.
Benito Villamarín

3
Real Madrid took all three points on their visit to the Benito Villamarín, coming back from 2-1 down at half-time to win it late on. A fine second-half performance from Zidane's men was rewarded by an Emerson own goal, before Ramos stepped up to complete the comeback from the penalty spot. Despite Valverde's early goal, Mandi and Carvalho struck in the first period to hand the hosts the lead at the break.

The game started at a frenetic pace and with both sides trading blows. The first chance fell to the visitors, when Casemiro's pass in behind the defence found Mendy's run from deep and the Frenchman cut into the box but his right-footed shot failed to find the target. The hosts' response took barely a minute to arrive, but Courtois made a superb stop to keep out Sanabria's header from inside the six-yard box.

Madridista dominance
The game was an end-to-end affair now and before the first quarter-of-an-hour was out, the first goal arrived. Benzema provided the assist from the right flank and Valverde slipped in unnoticed at the front post to make it 0-1. The madridistas had a great chance to increase their lead in the very next move, when Benzema's cross was cleared by Bartra, but the ball fell to Ramos, who had joined the attack, and his left-footed volley flew inches wide of the post.

This was Madrid’s best spell, but Betis reacted to get back into the game. In the 35th minute Canales crossed for Mandi to head in the equaliser. Things went from bad to worse for the Whites two minutes later when Carvalho fired a left-footed shot in past Courtois. The sides went into the break with the score at 2-1, after Real Madrid had almost levelled on 40 minutes when Ramos got on the end of a cross from Kroos and Benzema was denied by Joel in the area after a sublime pass from the German midfielder. Kroos was then forced off through injury and was replaced by Modrić.

Second-half reaction
Isco was brought on for Ødegaard at half-time and in the 48th minute Real Madrid got back on level terms. Carvajal’s low cross was turned into his own net by Emerson as he tried to clear the ball away. The goal spurred the visitors on and in the 67th minute Betis went down to ten men after Emerson was shown a straight red card for bringing down Jović when the striker was clean through on goal.

In the final 20 minutes Madrid began to pile on the pressure. In the 70th minute Valverde crossed and Benzema’s effort from inside the six-yard box went agonisingly over. The winning goal came in the 82nd minute when Bartra was adjudged to have handled the ball when tussling with Mayoral. The referee awarded a penalty, after a VAR check and Ramos, consistent as ever from 12 yards, scored his 17th consecutive spot-kick for Real Madrid to hand the reigning champions the three points. The Whites had more chances to add to the score, as Isco and Benzema both came close in the closing stages. 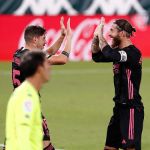