The captain was unveiled on 8 September 2005 and has gone on to lift 22 pieces of silverware.
The relationship between Real Madrid and Sergio Ramos began back on 8 September 2005. The Santiago Bernabéu that day hosted the unveiling of an outstanding player who 15 years later has become a cornerstone of the team and a club legend. Ramos is now preparing to embark on his 16th season at Real Madrid, where he proudly sports the captain's armband.

His madridista bow came two days after his unveiling, on 10 September 2005, when Celta were the visitors to the Santiago Bernabéu. He has since featured 650 times for the club, a tally which makes him Real Madrid's fourth-highest appearance-maker, behind only Raúl (741), Iker Casillas (725) and Manuel Sanchís (710). His decisive strikes in the Champions League finals (2014 and 2016), the UEFA Super Cup (2016) and the Club World Cup showpieces (2014 and 2018) served to further enhance his legendary status. Meanwhile, Last season proved to be most prolific campaign and he now has 97 goals to his name.

Honours
Not only is he the leader of the madridista backline, he also skippers the Spanish national team and is the country's most-capped player. Ramos has an outstanding trophy haul with Real Madrid after having captured 22 pieces of silverware: four Champions League crowns and Club World Cups apiece, a trio of UEFA Super Cups, five league titles, two Copas del Rey and four Spanish Super Cups. 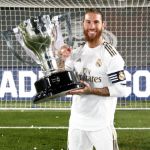