Ramos and Asensio, after two assists from Isco, got the Real Madrid goals in Leganés, finishing unbeaten in the 11 matches played after the restart.
Estadio Butarque

2
The league champions finished the season with a draw at Leganés and remain unbeaten in the 11 matches played after the restart (10 wins and 1 draw). Ramos and Asensio, after two assists from Isco, were the scorers for Real Madrid, who went in search of the win until the end of an exciting match.

Real Madrid started the match strongly looking to keep the winning run going and created the first dangerous move of the night thanks to Valverde. His shot from the edge of the area forced a good save out of Cuéllar with six minutes gone. Real Madrid took the lead three minutes later after an Isco cross was met by the head of Sergio Ramos who made it 1-0. Leganés fought back in search of an equaliser but Recio's shot from inside the box on 20 minutes ended up in the hands of Areola, but in added time, Bryan Gil equalised for the home side.

The goal was a huge morale boost to Leganés, but the madridistas went back in front not long after the break. A sweet Isco pass with the outside of his boot, the second of the night, found Asensio who finished well with 52 on the clock. The hosts, who were playing for their survival, pushed on in search of an equaliser and came close to finding it with two separate Óscar Rodríguez strikes from the edge of the box but an inspired Areola kept him out on both occasions. The goalkeeper was then back in action a minute later to keep out Assalé’s effort from inside the area.

Tense finish
The minutes ticked by and following the water break, Leganés did get their leveller through a fine Assalé shot across goal. The home side were doing everything to seal top-level football again next season and besieged the madridista area with increasing pressure. Brahim could have then added to the visitors’ tally on 82’ but his shot flew over the bar from inside the box. There would be no more goals in a pulsating finish, with the spoils shared between the two sides. 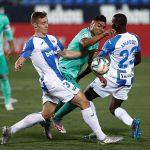