The frontman rounded off the scoring in the rout against Levante in the 2004/05 campaign.
Taking centre stage in this week's instalment of Historic Goals is Michael Owen. The forward checked in from Liverpool in the 2004/05 season, with his electric pace and predatory instincts in the box catching the eye. Despite spending only a season at Real Madrid, it was time enough for him to showcase his quality and goalscoring ability.

Matchday 13 of that La Liga campaign saw Real Madrid welcome Levante to the Santiago Bernabéu. The English forward struck the final goal in a 5-0 romp over the Valencians after he beat the visitors' goalkeeper following a fine team move. Guti weaved his way past several defenders before slipping the ball through an opponent's legs and into the path of the onrushing Owen, who produced a first-time finish. The forward, who landed the Ballon d'Or in 2001, made 45 appearances in Real Madrid colours and found the net 16 times. In the 2004/05 season, he featured in a prolific three-pronged forward line, alongside Raúl and Ronaldo [Nazário], that weighted in with a total of 53 goals. 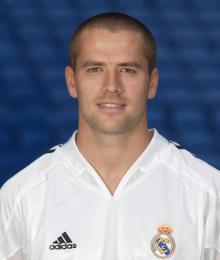