After an emotional video reviewing his feat, the captain was presented with a commemorative jersey with the number 779 signed by his teammates, he received it from another legend of Real Madrid basketball, Rafael Rullan. In addition, Antonio Martín, president of the ACB and former Whites player, handed him a trophy to commemorate this record. Felipe Reyes thanks the fans present at the WiZink Center, who responded with a big ovation. 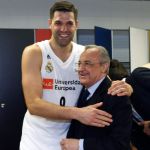