Goals from Carvajal and Bale gave the Whites their first three points of the season against Getafe at the Bernabéu.
Santiago Bernabéu

0
Real Madrid got their LaLiga campaign underway with a deserved victory against Getafe at the Bernabéu. The Whites dominated from the off and slowly took control of the match with the first chance coming after 16 minutes. Marcelo sent in a cross with his right foot, picking out the head of Gareth Bale who timed his run well to get in front of the defender, the Welshman was inches away from giving his side the lead as his effort came crashing back off the crossbar. This was a warning for the visitors who shortly after found themselves trailing. This time Bale was the provider, his ball in from the left was cleared by Soria as far as Carvajal who cleverly looped a header over the visiting goalkeeper.

From there until the end of the first half, Getafe barely troubled Real Madrid, but the hosts were unable to make their superiority pay. They had to wait until just six minutes after the break when Marco Asensio stole the ball off Djené before getting to the line and pulling it back for Bale who struck the ball first time with his left to beat Soria in the Getafe goal. The Whites came close to making it three after 54 minutes, a great strike from Asensio struck the post to the relief of the travelling fans.

Fully aware that his charges had completed 120 minutes just four days earlier, Lopetegui opted to freshen things up on 58' by introducing Casemiro for Isco. Two minutes later, Benzema and Asensio linked up, only for the latter's effort to be comfortably gathered in by Soria. The Whites continued to pour forward, whilst Getafe posed a threat with a fine counter-attacking move in the 74th minute which saw Ángel come a whisker away from turning the ball home on the goalline.

Defensive solidity
This, however, proved to be the only time that Getafe threatened a Real Madrid side who looked very solid as they went on to record a clean sheet. The hosts claimed victory in their LaLiga curtain-raiser and attention now turns to the first away game of the season, which comes next Sunday against Girona at Montilivi in a 22:15 kick-off. 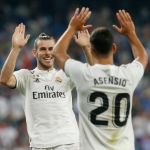