The team departed from the Santiago Bernabéu stadium towards the Palacio de Cibeles, headquarters of the City Hall. Mayor Manuela Carmena received the champions and congratulated them. Florentino Pérez and Felipe Reyes gave her a replica of the trophy and two dedicated t-shirts and she responded with some commemorative chocolate medals. The president of Real Madrid said: "The magical story of this team continues and here is la Décima, a triumph that represents a good part of the values ​​of Real Madrid. It’s been a demonstration of dedication, pride and courage, being able to overcome difficulties".

"Dear mayor, we promised to return and here we are. This is the success of a team forged in talent, humility and hard work. These players and this coach are leading the way at a time that basketball fans will not forget. We carry the name of our city around the world and accept the responsibility with it to be ambassadors of the values ​​of this city. Next Saturday our football team has another big challenge in the Champions League and they will give everything as you have done".

Carmena: "La Décima is a landmark and Madrid thanks you"
"Congratulations to everyone, I’m excited to know that you form a team and that you have achieved an unrepeatable feat. This tenth European Cup is an extraordinary milestone and Madrid thanks you. Thank you because with your success, you show what this city is about and because your game provokes great enthusiasm. You’re great, this is unstoppable and I hope that the 11th…, the 12th...are on their way".

Reyes: "We showed we’re a team in capital letters"
"It's a pleasure to come here, you always welcome us with open arms and hopefully we can come back again and again because it will be good for Real Madrid. When this season started we had major injuries and it looked like it was going to be a difficult year. The good thing about this group of humans is that it knows how to overcome these obstacles. We’ve proven to be a great team in capital letters".

After the ceremony at the City Hall, the Whites went to the Real Casa de Correos, seat of the Madrid Regional Government, where President Ángel Garrido was waiting for them. There was another exchange of gifts. Florentino Pérez and Felipe Reyes gave him a replica of the trophy and two dedicated t-shirts. The president of the Regional Government returned the gesture with a commemorative plaque. One of the most anticipated moments came when the players took to the balcony to parade the title to the madridistas.

"The team has won this title continuously overcoming all kinds of setbacks. An extraordinary squad that never gave in. Real Madrid, with Pablo Laso in charge, they have once again demonstrated that these players form a team where the essential values ​​of Real Madrid are very present".

Ángel Garrido: "This team is a one off"
"The Madrid region is fortunate. You have once again given a lesson in humility and a spirit of overcoming problems. This team is definitely a one off and an example for all the people of Madrid and Spain who believe that effort and sacrifice are the way to success. You have shown that Real Madrid is a benchmark that identifies our region. We’re proud to continue sharing your victories and we hope to do it again next weekend with la Decimotercera in Football".

Reyes: "We improve in the face of adversity"
"It's a pleasure to be here for the first time this year and hopefully it will not be the last. We have proven to be a team with character that grows in the face of adversity. That has seen us reach the Final Four in a strong position. We had an incredible playoff to get to Belgrade in the best possible way. Now, we hope that the football team wins and on Sunday we have the Champions League here". 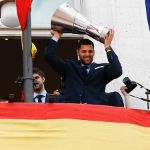