2
Real Madrid lost to Sevilla in their third-to-last LaLiga game, corresponding to the rescheduled matchday 34 fixture. The game started off slowly and there were few chances to speak of. The Whites looked to create something, while Sevilla played long balls up to their front line. Franco Vázquez was the first to test Casilla. But, little by little Zidane’s side started to put their stamp on things, getting into the opposition box, with Casemiro testing Soria with a long-range effort (15’). Asensio then tried his best with a back heel, before Kovacic’s thunderbolt from the edge of the box went narrowly wide.

On 26’, Sevilla found the back of the net. Muriel got his head onto a long ball, setting up Ben Yedder who made it 1-0. Real Madrid tried to react, but could not finish their chances. The hosts continued to create real danger going forward. On 42’, Nacho cleared one off the line after an effort set up by great play between Muriel and Franco Vázquez. On 45’, Layún beat Casilla after Nzonzi picked up on his own parried effort and slid his teammate through.

Zidane's side looked to reduce the deficit after the break with Sergio Ramos trying his luck from a direct free-kick that went wide of the Sevilla goal. Then in the 57th minute, the captain stepped up, looking to convert the spot kick won by Lucas Vázquez, but his effort came crashing back off the crossbar. Shortly after, Sevilla had the chance to wrap things up on the counter attack, but Vallejo prevented Ben Yedder extending the lead while Casilla kept out Muriel. The game was wide open and Ramos again came close, this time his effort went over the Sevilla bar after a corner kick.

Mayoral and Ramos
Lady luck wasn’t shining on Real Madrid this evening as the clock ran down. The Whites continued to probe the Sevilla goal and with 78 minutes played, Casemiro connected well with a strike from outside the area that went inches wide. The home side did get a third after a cross was turned in to his own goal by Sergio Ramos with Casilla unable to keep it out. Real Madrid never gave up and hit back through Mayoral after a daring cross from Asensio with 3 minutes of normal time left to play, then, deep in to injury time, Mercado gave away a penalty after a coming together with Theo. Ramos then pulled one back from the spot to make it 3-2 as Madrid quickly turn their attention to Saturday’s match against Celta, the last game this season at the Bernabéu. 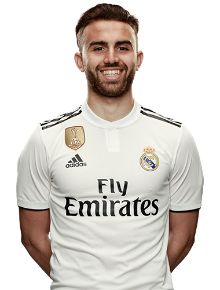 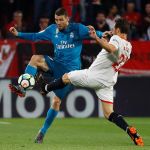