Bale and Cristiano Ronaldo scored for the Whites, who now have the Champions League final to think about.
La Cerámica

2
Real Madrid ended their LaLiga campaign with a draw at the Estadio de la Cerámica before they contest the Champions League final. Villarreal showed their grit first, in the 3rd minute, as Enes Ünal tested debutant Luca Zidane. The Whites tried their best with shots from Sergio Ramos and Cristiano Ronaldo, which Andrés Fernández proved his mettle to save.

The visitors tried again, but just after the 10-minute mark, the madridistas were in front. Luka Modric laid on a pass to Gareth Bale and the Welsh star, lost Daniele Bonera without even touching the ball, before sending home a perfect right-footed effort.

A dream move
Real Madrid were dominating the game and on half an hour they extended their lead. The move was a real work of art. A beautiful diagonal pass from Isco with his left foot started it all, followed by a sublime piece of control from Marcelo, who provided an exquisite assist with the outside of his foot and the move was capped off by a rocket of a header from Cristiano Ronaldo, who left Andrés Fernández helpless.

The Whites were enjoying their best spell of the night and they could have headed in to the interval with a bigger lead had Cristiano Ronaldo been more clinical when a loose ball fell to him in the box in the 39th minute and had it not been for Andrés Fernández's fine diving save from Toni Kroos' effort from the edge of the area a minute later.

Superb save from Luca
The second period was a far more evenly contested affair. Villarreal began the half by posing a threat from set pieces, with Luca Zidane pulling off an excellent save to keep Nicola Sansone's free-kick out. On the hour mark, Zidane opted to introduce some fresh legs and sent Karim Benzema and Lucas Vázquez on in place of Cristiano Ronaldo and Luka Modric.

Villarreal level terms
The home side upped their game and came close to halving the deficit on 67' through Enes Ünal's headed effort, only for Sergio Ramos to save the day on the goalline. However,the hosts weren't to be denied three minutes later when Roger Martínez crashed the ball home following a fine solo run. Just as the game appeared to be petering out, Samu Castillejo nipped in to score an 85th-minute equaliser. The Whites could still have snatched victory in injury time but Andrés Fernández produced a sublime save to deny a Benzema effort from the edge of the area that was destined for the corner of the net, whilst Ramos failed to hit the target when he pounced on a loose ball in the box. The Whites' have now shifted their attentions to the Champions League final. 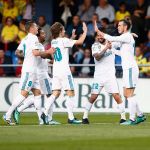