Barcelona scored first, Ronaldo equalised, the home side went ahead again with a goal that saw Varane fouled in the build up and Bale equalised with a great goal for the Whites, who are left asking how there wasn't a penalty after a foul on Marcelo.
Camp Nou

2
Real Madrid deserved to win the Clásico, which was entertaining from the off. Neither side came out looking for the draw and the Whites started positively, looking to press high up the pitch. Despite this, Barcelona went ahead in the 10th minute. A cross by Sergi Roberto was turned home by Luis Suárez from inside the area, beating Keylor Navas. The visitor reacted well and five minutes later levelled up the match. A great counter attack saw Kroos play a nice one two with Cristiano Ronaldo, allowing the German midfielder to deliver to the back post where Benzema headed the ball back in for the best player in the world to add the finishing touch to make it 1-1.

The goal gave Real Madrid a lift, seeing them put the home side under pressure and almost go in front on the half hour mark. They had the chance to go in at half time with a lead thanks to two chances involving Cristiano Ronaldo. Ter Stegen came out on top in a one-on-one with 27' on the clock and a minute later, a shot form the Portuguese forward went just wide. The game was all square at the break although the home side were reduced to ten men after the sending off of Sergi Roberto.

Controversial goal
Asensio replaced Cristiano Ronaldo, who picked up a knock in the build-up to the goal, and Semedo came on in place of Coutinho. Real Madrid were first to go for it in the second half, but Asensio's right-footed shot in the 52nd minute ended up in Ter Stegen’s hands. A minute later Messi scored for Barcelona after Luis Suarez went in strong on Varane at the beginning of the move.

Real Madrid went in search of the equaliser as Zidane sent on Lucas Vázquez after in place of Nacho. The Whites left space at the back and Messi came close to capitalising on 70’, but Keylor Navas was able to make a save. Three minutes later, the madridistas grabbed a goal. Asensio passed through the eye of a needle and Bale sent home a curling shot from the edge of the box, leaving Ter Stegen helpless. 2-2 with 20 minutes to play.

Penalty on Marcelo
The European champions had a chance on 76’ but the referee would not blow for a penalty after Jordi Alba tackled Marcelo. The visitors tried their best until the final whistle, making this Clásico all the more enthralling. 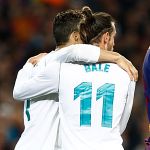