The Whites put the game to bed after the break to pick up another league win.
Fernando Martín

90
It's a third win in seven days for Real Madrid and number 25 in this league season, as the leaders came out on top in a hard-fought clash. They killed the game with 30 points in the third quarter to take the win before heading into next Tuesday's Euroleague play-off against Panathinaikos. Ayón was outstanding in the second quarter (14 points, 9 rebounds and PIR of 22); while Randolph was the key man in the third (16, 5 and 16) and Doncic was superb throughout (17, 5 and 26). The Fernando Martín also witnessed Laso's 400th win with the Whites, while youth product Pantzar made his first-team debut.

A Doncic triple broke the deadlock 17 seconds in and signalled the start of a 6-14 run in barely four minutes, which startled Montakit Fuenlabrada into life. Up to that point, Tavares had dominated in the paint (7 points and 3 offensive rebounds). But the hosts did wake up, led by Cruz (7 points) and a 9-0 saw them go back in front. Baskets were flowing for both sides until the Causeur and Ayón combination gave Madrid a momentaneous advantage in the first ten minutes (22-23).

Ayón unstoppable
The Mexican took control to such an extent that he was the man to net ten consecutive points for the Whites, with 5 out of 5 on two-pointers as the Fuenlabrada backline were helpless to stop him. Néstor García's men came back to life once more though, as Eyenga began punishing the Whites in the paint. That was where the game was to be won or lost, with little action from the 6.75. Five points in a row for Real Madrid (Doncic 3 and Radoncic 2) made it 35-40.

With this purple patch towards the end of the first half before coming out all guns blazing after the break, Laso's men began to take the game away from their opponents. Doncic led the way early in the second half alongside Randolph (4, 12 at the end of the quarter) and Taylor (3). All the three-point action we had been waiting for in the first twenty minutes came at once. An exchange of blows favoured the Whites, who took their advantage to +19 (45-64, min. 27) with a 0-12 run. Real Madrid swiftly crushed any hopes harboured by the hosts with Doncic on fire (48-70, min. 30).

Pantzar makes his debut
Fuenlabrada, with less depth in their squad than the Whites, were playing for pride now as they looked to minimise the deficit and put the visitors under pressure with a 15-5 run. But Madrid remained disciplined as Laso began rotating, making the most of his bench. First up Taylor came on to calm the waters and he was followed by Causeur, a great ace up the sleeve in key moments. Time ran down until a final 75-90 which sees the madridistas their third league win in seven days. It was a big day for the youth graduate Pantzar, who made his first-team debut. 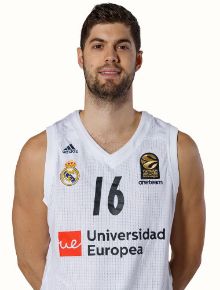 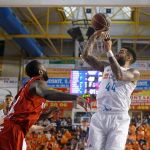