1
Real Madrid got the better of Leganés just three days ahead of their Champions League semi-final second-leg clash. The Whites were ahead inside ten minutes when Benzema picked the ball up on the edge of the box and his left-footed shot struck Zaldúa. Gareth Bale was quickest to respond, and he pounced on the loose ball to turn it just beyond the reach of Cuéllar and into the back of the net.

The hosts were bossing possession, but Leganés had a chance to level it up before the half-hour mark. Rico sent in a free-kick in the 25th minute and Guerrero glanced the ball on at the front post, only to see his effort come back off the upright. The Whites were startled into a quick response, and four minutes later, Borja Mayoral got in front of Cuéllar after he'd spilled the ball, but the striker's effort was cleared off the line by Bustinza.

Mayoral nets his first league goal at the Bernabéu
The chances continued to flow for both sides, and only the crossbar prevented Nordin Amrabat from bringing the scores level when he struck from the edge of the box on 37’. Seven minutes later and Mayoral's dummy left Ceballos with a shooting opportunity, but his curling effort flew just wide. Then, just as it looked as though the teams would head in all square at the break, Madrid extended their advantage. Kovacic crossed, Bustinza got his head to it but Mayoral was on hand to poke the ball home. It was the academy graduate's first league goal at the Bernabéu

The high-octane tempo of the opening period tailed off somewhat in the second half. Real Madrid continued to enjoy the lion's share of possession, whilst Leganés were barely managing to make any inroads into the hosts' box. Zidane opted to shuffle his pack in the 62nd minute, with Toni Kroos and Marco Asensio entering the fray in place of Mateo Kovacic and Karim Benzema. Within four minutes of this double substitution, the visitors halved the deficit. Amrabat's drilled cross from the by-line picked out Darko Brasanac, who was left with the simplest of tasks to tap the ball into an unguarded net.

Casilla to the rescue
Leganés poured forward in search of an equaliser and came a whisker away from restoring parity in the 74th minute. Brasanac's whipped free-kick delivery from out wide was met by Unai Bustinza, who stole in at the far post. His off-balance effort would have levelled terms had it not been for a fine save from Kiko Casilla. After that scare, Real Madrid managed to see the game out and go on to record the three points. The European champions' attentions have now shifted to the Champions League and Tuesday night's Bernabéu meeting with Bayern Munich 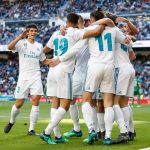