The midfielder scored the first goal and set up Casemiro for the second on the way to the fifth consecutive away win.
La Rosaleda

2
Real Madrid took the three points at La Rosaleda in a game that they controlled from start to finish. Isco, led the way on his return to Malaga, opening the scoring with a great free-kick and setting up Casemiro to get the second. Although the Whites conceded a Rolan goal in added time, Zidane’s side got the win, making it 100 victories as Real Madrid coach for the Frenchman, and putting together a run of five consecutive wins on the road.

The Whites dominated proceedings from the off. Isco was pulling the strings for Zidane’s team, who moved the ball around patiently waiting for their chances. Benzema fired the opening shots, getting on the end of a couple of Real Madrid attacks inside the opening 20 minutes, but he was unable to find the net. However, it was Kovacic who had the clearest chance in the early stages, when his header was saved by Roberto in the Malaga goal.

Isco's goal
The match was being played at a high tempo and chances were flowing. The only thing missing was a goal. In the 22nd minute, Chory got on the end of the first real chance for the hosts. Soon after Lucas Vázquez shot over after great combination play with Benzema and Isco. It was the prelude to the opening goal. Isco broke the deadlock with a masterful free kick, putting his side 1 up with 29 minutes on the clock. Before the break, and after another dangerous shot by Isco, Iturra robbed the ball off of Casemiro and found himself one-on-one with Keylor but the Costa Rican keeper kept him out.

Madrid continued their dominance in the second period. The team came out after the break looking to kill off the contest as quickly as possible. With 50 on the clock, Benzema was inches away from getting his shot off following a fine cross from Lucas. Then, with 63 minutes gone the second goal did arrive thanks to some slick link-up play started and finished by Casemiro. The Brazilian won the ball back, fed Lucas who found Benzema, who cut inside and slipped a pass to Isco. The Spaniard topped off a superb performance by sliding the ball across the box to assist Casemiro who turned the ball home.

Further chances
Despite being up against it on the scoreboard, Málaga refused to roll over and Chory tested Keylor once again on 68’. Zidane decided to change things and brought Ceballos and Mayoral off the bench to replace Asensio and Isco. The Malaga-born man was given a standing ovation as he made way. With 77 minutes gone, Mayoral struck from inside the box but Roberto was alert to deny him. Málaga were still looking for their goal though, and Lestienne tried his luck from the edge of the area before a Rosales cross forced Navas to punch clear. In the aftermath, Ramos had a fine chance to make it three following a sublime Benzema pass, but it was Rolan who got a goal to cut the deficit with the final kick of the game. Full time and a 1-2 win before attentions turn to the midweek clash with Athletic. 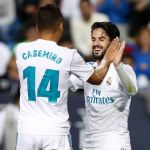