Cristiano Ronaldo scored the Whites' goal with a neat flick after Kepa had kept out numerous chances.
Santiago Bernbabéu

1
Real Madrid deserved the win against Athletic but ultimately had to settle for a point thanks to a Cristiano Ronaldo effort in the closing stages of what was a frenetic clash. With just seven minutes gone, Keylor Navas was forced into a super stop when San José was sent through one-on-one, before Real Madrid rattled the bar two minutes later. Carvajal whipped one into the box and Cristiano Ronaldo's powerful header had Kepa beaten but came crashing back off the frame of the goal. The Portuguese ace tried his luck once again on 13’ but his curling effort following a nice turn flew just wide.

Athletic launched an immediate and effective response. A fine Córdoba through ball with 14 on the clock was met with equal class by Williams, who lifted the ball over the onrushing Keylor Navas. They'd have to come from behind but two superb Kepa stops kept the visitors in front. The first saw him get down sharply to keep out Cristiano Ronaldo on 16’ before three minutes later he smothered Marcelo's effort from the edge of the box.

Wonderful Asensio move
From that point on, Real Madrid had complete control of the game. Kroos took a free-kick on 31’ and Kepa was once again superb to keep out a Varane header. The Whites deserved a goal and kept to their task creating two more clear openings before the break. Carvajal struck from the edge of the area on 39’, the ball hit the visiting defender and flew inches wide of the post. The last opportunity of the first half arrived after a spectacular individual move by Asensio, which saw him leave three defenders in his wake but once again the impressive Kepa was equal to his shot.

The beginning of the second half was very different from the first period. Real Madrid dominated with Athletic looking to hit them on the counter-attack. But despite the Whites’ superiority, the best chance fell to Athletic. A cross from De Marcos in the 64th minute came across the area and was met by Córdoba whose shot struck Carvajal. The rebound fell to Raúl García, but his effort came back off of the crossbar. Four minutes later Zidane decided to change things up, bringing on Bale and Isco for Benzema and Asensio.

Cristiano Ronaldo flick
The home side continued to cause problems for the visitors and a 72nd minute Marcelo cross picked out Bale whose shot was just off target. Another cross from the Brazilian three minutes later was this time met by Lucas Vázquez but Kepa kept the winger out. It was all Real Madrid as they pinned Athletic back inside their area until they found a way through. With 87 minutes on the clock Modric shot from the edge of the area and Cristiano Ronaldo flicked the ball with his heel to take it past Kepa. Honours even as thoughts shift to the first leg of the Champions League semi-final. 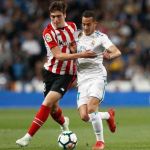