Cristiano Ronaldo scored the goal for the Whites, who deserved to take all three points in the derby.
Santiago Bernabéu

1
Domination with little reward in the derby. Real Madrid were superior, had control of the game and created the better chances, including hitting the crossbar on two occasions. However, they weren’t able to pick up all three points in a very intense match which saw Atlético keeper Oblak pull off some great saves. Cristiano Ronaldo put the Whites ahead with a stunning volley that sees his current great run of form continue. Griezmann levelled things up for the visitors. Real Madrid, who went in search of the victory until the end, will now switch attentions to Wednesday's game against Juventus.

Zidane's side came out playing with a greater intensity, moving the ball quickly and keeping Atlético penned in their own half. In the first 15 minutes they created several chances in and around the Atlético area. The first shot came from Cristiano which Oblak kept out before in the 11th minute, a shot by Asensio struck the woodwork after ​​Kroos went down in the area under pressure from Juanfran. The Whites were in control of the game with Oblak keeping the visitors in the game. In the 20th minute, the goalkeeper saved a powerful strike from Cristiano and in the 28th he pulled of a point-blank save from from Varane.

Marcelo strikes the woodwork
The first chance for the visitors came at the end of the first half. Diego Costa took advantage of a flick on by Koke but his shot was turned behind for a corner by Keylor Navas. Atlético improved as the half went on but the best chances were being created by Real Madrid. With 42 minutes on the clock Marcelo looked to curl one in with his right foot but his effort came back off of the bar. The ball fell to Carvajal on the edge of the area, the full back struck it well and forced Oblak in to another good save, putting it behind for a corner. Despite the Whites’ domination, the sides went in to the break all square.

The second half began in a similar vein to the first. Real Madrid dominated and Atlético were able to defend well. The only thing missing was the goal and eventually it came from who else but Cristiano Ronaldo. On 53 minutes, the Portuguese star fired in his 40th goal of the season, neatly dispatching a perfect cross from Bale on the left-hand side. It was 1-0, and the Whites looked to continue to attack whilst Atlético wasted no time in launching a counter attack to find a response. Griezmann received the ball down by the goal line to set up Vitolo, who closed in on Navas in goal. The keeper got a touch on the ball but the Frenchman was on hand to slot home the equaliser on 57’ minutes.

Chances
After the goals, the game lost its flow and went back and forth. There were chances for several players. Keylor Navas, had to stretch to keep out a second goal for the visitors on 59’, after Koke took a shot from inside the box. Zidane and Simeone decided to roll the dice with substitutes coming on for both sides. Cristiano was replaced by Benzema. Modric and Isco were brought on to freshen things up in midfield. Madrid were looking for the win and Atlético were trying their best at the other end. As the final whistle approached, the Whites continued to attack. Oblak made a stellar save from Ramos in the dying moments. The spoils were shared in the derby, while the focus within the camp now turns back to the Champions League. 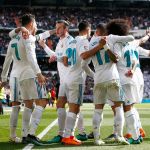