A double from the Portuguese hitman, the second of which was a stunning bicycle kick, and a Marcelo strike move the European champions a step closer to the Champions League semi-finals.
Juventus Stadium

3
The defending European champions once again imposed their rule as they took a massive step towards the Champions League semi-finals at the Juventus Stadium against last season's beaten finalists. A  Cristiano Ronaldo brace, the second of which was a stunning bicycle kick that will go down in Champions League folklore, and a Marcelo goal, coupled with the tireless effort of the whole team proved to be key in overcoming opponents who had tasted defeat just once in their last 74 home outings.

Real Madrid forged ahead with just three minutes on the clock, when Marcerlo played an inviting pass for Isco to run on to and his left-footed cross picked out Cristiano Ronaldo, who stole a march on the home defence and poked the ball past the diving Buffon. This goal means that the Portuguese has now found the net in each of his six meetings with Juventus.

Kroos denied by the woodwork
The holders were now in front and it was time for the hosts to produce a reaction. Dybala swung over a free-kick on 23' which was met by Higuaín in the six-yard box, but he was denied by a stunning save from Keylor Navas. Ten minutes later, De Sciglio tried to haul his side level but his cross drifted across the face of goal with nobody on hand to apply the finish. The game had become an end-to-end affair and whilst the home side came close to levelling terms, Madrid equally very nearly doubled their advantage in the 36th minute. Toni Kroos fired in a crisp first-time piledriver which flew past Buffon only to rattle the bar on its way over.

The second half kicked off at the same break-neck pace and just as in the first period, the opening chance fell to Cristiano Ronaldo, but shot across goal on 50 minutes flew inches wide of the post. Juventus were well aware they could not sit back though and a Dybala free-kick with 56 minutes on the clock took a wicked deflection off the wall and nearly caught Keylor Navas wrong footed.

Ronaldo nets a worldie
Just when the game looked to be turning the way of the hosts as they searched for the equaliser with increased urgency, the best footballer on the planet popped up to stun the Juventus Stadium into silence. Carvajal did well to keep the ball alive after Buffon had expertly repelled a left-footed Lucas Vázquez strike, and his chipped cross was pounced on by Cristiano Ronaldo, who rose to smash home an implausible overhead kick. Such was the quality of the strike that it drew applause from sections of the home faithful.

Marcelo puts the icing on the cake
The game went from bad to worse for the hosts when Dybala was given his marching orders in the 66th minute for a second yellow card and Madrid finished the rout with a fine Marcelo goal on 72’. The Brazilian linked up nicely with Cristiano Ronaldo pulled out a sublime touch to lift the ball over Buffon before poking the ball into the back of the net. It was a fitting end to a truly outstanding performance from the reigning European champions, and it could have been even more comfortable, but for Buffon foiling Cristiano Ronaldo in a one-on-one in the 85th minute, before Kovacic smashed the crossbar three minutes later. 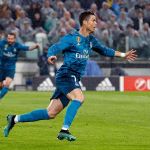