Lucas Vázquez and Gareth Bale scored the other two goals for the madridistas, who recorded their fourth consecutive victory in the game against Girona as they head in to the international break.
Santiago Bernabéu

3
Real Madrid made it four consecutive wins after beating Girona to head in to the international break on the back of a perfect month of March. This season’s surprise package couldn’t do anything to stop the attacking Masterclass put on by the Whites, with Cristiano Ronaldo leading the way with a four-goal haul.

From the off Real Madrid looked dangerous and had two good chances before opening the scoring. Cristiano Ronaldo had the first, but his free-kick after five minutes was saved by Bono in the Girona goal. Two minutes later, Karim Benzema played in Lucas Vázquez with a great ball, but the visiting goalkeeper was equal to it and kept him out in the one-on-one.

Set piece
The first Whites’ goal came from a set piece. Kroos took a short corner to Marcelo, who returned the pass to the German midfielder, his cross picked out Cristiano Ronaldo who struck it first time from around the penalty spot. Another side that the Portuguese forward has scored against, making it 64 different teams on the receiving end of his goals in a Real Madrid shirt.

Girona levelled things up
Girona almost equalised on the quarter-hour mark, a good cross from Mojica saw Portu just inches away from finding the back of the net. The home side continued to attack and would have doubled their lead but for the assistant referee’s flag, which denied Lucas Vázquez from making it 2-0 when the wide man was clearly onside. Five minutes later the visitors drew level. Granell swung in a corner which Stuani powered home with his head. The hosts pushed forward in search for a second but the teams went in at the break all square, despite Real Madrid having two good chances before the interval. Cristiano Ronaldo tried his luck from the edge of the area after 33' but Bono saved the effort at the second attempt. The goalkeeper was again called in to action three minutes later, turning away an Asensio free-kick.


The second half couldn't have got off to a better start as the madridistas restored their lead just three minutes after the break, when a fine slipped pass from Benzema was crashed home with real aplomb by Cristiano Ronaldo. Real Madrid were now in command and went on to further extend their lead 10 minutes later, with a move that saw the Whites slickly cut through the visitors' lines. Benzema and Marcelo exchanged passes before the Frenchman found Cristiano Ronaldo, and just when it looked as if the Portuguese was primed to pull the trigger, he teed up Lucas Vázquez, whose placed a precision finish just inside the near post.

Sensational Cristiano Ronaldo
The hosts were now really enjoying themselves and putting on a real show for those in the stands. Marcelo drew chants of 'Olé' with a silky back-heeled pass in the 62nd minute and soon afterwards Nacho connected with Marco Asensio's cross, only to see his headed effort come back off the crossbar. Real Madrid were playing some swashbuckling stuff and just three minutes later came their fourth of the night. Asensio fed Benzema, whose effort was parried by Bono, but the rebound fell to Cristiano Ronaldo, who was on hand to rifle home from point-blank range.

Girona reduced the arrears in the 67th minute, with Stuani once again nodding the ball home from yet another set piece to make it 4-2. Zinedine Zidane next decided to shuffled his pack, introducing Gareth Bale and Luka Modric for Asensio and Mateo Kovacic. The closing stages were simply breathtaking, serving up a further three goals. The first of these was scored by Bale, who fired home in the 86th minute after being played through by Modric.  Next up, Juanpe cut the deficit from an 88th-minute free-kick and the scoring was rounded off in injury time by Cristiano Ronaldo, whose strike brought his tally for the night to four as the Bernabéu faithful were treated to a real goal fest. 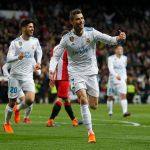