The madridistas once again got the better of PSG, courtesy of goals from Cristiano Ronaldo and Casemiro, to book their place in the Champions League quarter-finals.
Parc des princes

2
Real Madrid tonight booked their place in the Champions League quarter-finals after overcoming PSG for the second time in this tie. The Whites imposed their rule, that of the defending European champions and the side which has emerged victorious in three of the last four editions of the Champions League. The visitors offered a masterclass in resilience in an opening 45 minutes which ended goalless, before showcasing all of their attacking prowess in the second half.

The game got off to a rip-roaring start and there were a string of chances at both ends. The first opportunity of the night fell to the visitors. Marco Asensio sent a cross over in the 10th minute and a wicked deflection off Marquinhos sent the ball off course but Areola was on hand to gather on the goalline. Madrid then went on to carve out two more clear-cut openings. In the 18th minute, the Whites opted for a short-corner routine that saw Asensio whip in another cross that fell to Sergio Ramos, who fired in a left-footed effort, only for the diving Areola to come to PSG's rescue. The hosts' custodian was again the hero 20 minutes later, when Benzema found himself clean through, albeit with the angle against him, and Areola once again pulled off a fine save. In the 43rd minute, the French side had their best chance of the half but Mbappé was thwarted by an outstanding save from Keylor Navas.

Cristiano Ronaldo strikes
Real Madrid had put in a stellar first-half performance and came out after the restart showing the same concentration levels. Despite the home faithful once again willing their men on, Madrid it was who came close to getting their noses in front. Marcelo shaped in a cross that Cristiano Ronaldo met with a diving header that whistled narrowly past the upright. However, the Portuguese frontman wasn't to be denied with his next chance, which came just two minutes later. A sumptuous pass from Asensio found Lucas Vázquez and his cross was nodded home by Ronaldo to hand the visitors the lead.

PSG now needed three goals to take the game into extra-time and Real Madrid managed the significance of the fact superbly, stretching the pitch as wide as they could with a steady spell of possession. Things went from bad to worse for the home side when Verratti was sent off for a second yellow card on 66 minutes. Three minutes later, and the Whites could have increased the deficit when Benzema laid the ball back to Asensio, whose shot from inside the area crashed back off the post.

Cavani levels things up on the night
Real Madrid had the tie well under control, but Cavani did bring his side level on the night after Di María had crossed in the 71st minute, Thiago Silva nodded back across goal and Pastore turned the ball towards goal. His shot struck Casemiro, ricocheted off the Uruguayan forward and ended up in the back of the net.

Casemiro makes sure
The goal seemed to give the hosts a new lease of life, but on 80' Casemiro ensured there was to be no miraculous comeback and sealed the Whites’ place in the quarter-finals. Cristiano Ronaldo cut the ball back to the edge of the area, where the Brazilian was waiting to shoot towards goal. His effort took a wicked deflection off Marquinhos which wrong-footed Areola in the PSG goal. Real Madrid’s place in the next round was now all but certain, and only the post kept them from increasing the deficit further. Bale crossed for Lucas Vázquez on 83’, with the upright denying the winger from six yards out, before barely a minute later, a fierce Cristiano Ronaldo drive met the same fate. The European champions came out on top in both legs of the tie to book their place in the quarter-final draw. 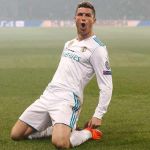