A brace for the Portuguese hands Real Madrid the three points following a hard-fought clash with Éibar.
Ipurua

2
The stage he's playing on doesn't make the slightest bit of difference to Cristiano Ronaldo. Four days after an instrumental performance in Paris, the Portuguese hitman once again demonstrated exactly why he's the greatest player on the planet. The Real Madrid striker, who has notched 13 goals in his last seven outings, bagged at brace to hand the Whites victory at Ipurua. The visitors were able to adapt to a tough and hard-fought encounter, in which grit and hard work were the order of the day, to ultimately secure the spoils and continue the clean sweep of wins so far in March.

Far from enjoying long spells of possession and fashioning clear-cut chances on the opposition's goal, Madrid found themselves under the cosh right from the off. José Luis Mendilibar's charges were playing at a great tempo and looked to threaten Keylor Navas's goal by sending crosses into the box. In the 19th minute, the Costa Rica international was forced to palm a fine Kike García effort behind for a corner. Madrid, meanwhile, were struggling to link up with Gareth Bale and Crisitiano Ronaldo. On the half-hour mark, Nacho came on in place of Varane, who suffer a bang to the head following a challenge with Kike.

The opener
After weathering the early storm, the Whites began to get a foothold in proceedings. However, a series of interruptions continued to stop the flow of the game. A Joan Jordán header for the hosts and a one-on-one chance for Bale, which Marko Dmitrović dealt with, were the only two rare sightings on goal. That was until Ronaldo popped up. There were 34 minutes on the clock when Luka Modric nipped in to regain possession and play a sublime pass with the outside of his boot that the Portuguese sharpshooter brought under his spell before finishing with aplomb. Madrid's quality and cutting edge made all the difference. After having got their noses in front, the Whites looked more assured and could have even double their advantage before the break, but Dmitrović turned Ronaldo's fierce drive over the bar.

Éibar came out all guns blazing after the break. Gonzalo Escalante sent in a wicked cross that was put behind for a corner by Keylor. The hosts' goal wasn't long in coming though. Pedro León took the corner and Ramis fizzed in a headed goal (50’).

Clear chances
They needed a reaction and Real Madrid looked for the next goal. Cristiano managed to get on the end of a ball after some exquisite team play. Shortly after, Modric rifled in a shot but it had too much on it. Cristiano and Bale sent in efforts on 62 minutes, as Madrid were getting even closer. The Portuguese was again denied by Dmitrović and the Welshman headed agonisingly wide.

The game was wide open but Real Madrid looked more confident. Zinedine Zidane sent Karim Benzema and Lucas Vázquez into the fray as they looked for the win. Éibar continued to pose a threat from set pieces as Paulo’s bicycle kick went straight into Keylor’s arms. The home side had really stepped up a gear now. It was the best player in the world who made his presence felt as he latched onto a Carvajal cross to claim his second of the game, this time burying a header (84’). Real Madrid and Cristiano take the spoils yet again. 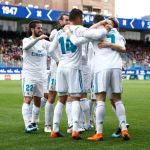