A Cristiano Ronaldo brace saw him move on to 300 LaLiga goals, and strikes from Bale and Benzema made sure of the Whites' fifth win on the bounce.
Santiago Bernabéu

0
Real Madrid show no signs of letting up, continuing their fine run by thrashing Alavés at the Bernabéu to pick up their fifth win in a row. The first goal took a while to arrive despite the hosts creating several good opportunities to take the lead. The first chance came with just 9 minutes gone, but Cristiano Ronaldo's effort struck Dani Torres and flew behind for a corner. Nine minutes later and the Whites crafted a superb chance to open the scoring, but Benzema shot wide when one-on-one with Pacheco, following a rapid counter-attack led by Kovacic.

The chances were coming thick and fast for the hosts, Benzema receiving the ball out wide on 25, fooling the defender with a lovely step-over and whipping in a measured cross with his left boot. Bale was the target, but his sublime overhead kick flew inches wide of the post. Ten minutes later and it was Lucas Vázquez's turn to try his luck from the edge of the box, but Pacheco got down smartly to keep his effort out. Alavés had some success on the counter though, and Pedreza forced Keylor Navas into a fine stop with a driven effort on 37'.

Cristiano Ronaldo's first
Just as the teams looked set to head into the break on level terms, Cristiano Ronaldo popped up to extend his fantastic goal-scoring run. The ball fell to Benzema inside the area on 43 minutes, and he poked a clever back-heeled assist to the Portuguese ace, who made no mistake with his left-footed strike. Today's brace means the forward has now found the net 12 times in his last seven games. Real Madrid took to the dressing room at half-time a goal to the good.

Making the breakthrough right on the stroke of half-time gave the hosts a boost and certainly had the desired effect, with Madrid's second coming just after the restart. Alavés got the half underway and immediately after the kick-off, Benzema dispossessed Alexis and slipped the ball to Bale, who made no mistake with the finish. That was the French hitman's second assist of the afternoon and he himself was on target in the 51st minute, only to see his effort wrongly ruled out for offside.

Cristiano hits 300th league goal
Real Madrid were in full flow and they were enjoying their best spell of the game. The hosts came close to adding to their lead on 54' when Bale's strike from the edge of the area crashed against the crossbar. However, just seven minutes later, the third of the afternoon did materialise. Lucas Vázquez this time claimed the assist and Cristiano Ronaldo swept the ball home from the penalty spot to bag a brace and his 300th league goal in a Madrid shirt.

BBC complete the rout
Had it not been for Pacheco's heroics, the madridistas would have added to their lead in the 66th minute. Theo was at the heart of a fine move which saw him march past four opponents, before being thwarted by the visitors' custodian, who was equal to his effort. In the 89th minute, Benzema got the goal that his performance deserved, converting from the spot after Laguardia had felled Bale in the area. Real Madrid took the spoils and claimed a fifth win on the spin as attentions now turn to Tuesday's trip to Espanyol. 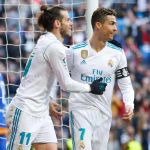