5
Real Madrid picked up all three points against Betis in a pulsating and highly entertaining encounter that served up no fewer than eight goals and plenty of goalmouth incident at both ends. The Whites forged ahead with just 11 minutes on the clock, when Lucas Vázquez laid the ball back to Cristiano Ronaldo  and despite his fierce shot being parried away by Antonio Adán, Marco Asensio was on hand to nod a precise header into the corner of the net.

That goal served to bring the hosts to life and they duly went on to carve out two chances to haul themselves level. Joaquín whipped in a corner kick in the 22nd minute that was met by Mandi, whose towering header flew just inches wide of the upright. Joaquín again tried his luck five minutes later with a free-kick effort that was kept out by a stunning diving save from Keylor Navas.

Theo replaces Marcelo
On the half-hour mark, Zinedine Zidane was forced in to making his first change of the night as Theo came on in place of the injured Marcelo. Betis had managed to weather the storm and came from behind to head in at the break in the ascendancy. Mandi connected with a Joaquín centre in the 33rd minute to restore parity and just four minutes later, Junior applied the finishing touch to a sweeping counter-attacking move from the hosts, with the ball striking Nacho, who attempted to clear the danger, before crossing the goalline.

Real Madrid came out all guns blazing after the restart as they looked to turn the tie around, and it took them just five minutes to bring the scores level. Lucas Vázquez swung in a corner and Sergio Ramos rose highest to power a bullet header past Adán and into the back of the net. It was a fine spell for Real Madrid, and they could have taken the lead through Gareth Bale, who found himself in two one-on-one situations in quick succession, but the Welsh forward failed to finish from tight angles and gave the hosts’ goalkeeper just enough time to react brilliantly to keep him out.

An Asensio double
It seemed just a matter of time before the visitors would find their third goal, and so it proved just two minutes later. A wonderful run by Dani Carvajal saw him skip past two defenders on the right flank, and his cut-back was beautifully met by Asensio to guide home Real Madrid’s 6000th LaLiga goal. The Whites were back ahead, and they capitalised on their purple patch by increasing the deficit with 65 minutes on the clock. Cristiano Ronaldo brought the ball down just inside the box, cut inside Mandi and drilled a vicious shot through a small gap between two defenders which caught Adán off guard.

The game was not over though, and on 85 minutes Sergio León struck to leave the result shrouded in uncertainty for just a few minutes, before Karim Benzema, who had replaced Cristiano Ronaldo in the 89th minute, netted in added time to put the points beyond doubt. Real Madrid therefore started this week, in which there are nine points up for grabs, in the best possible fashion. 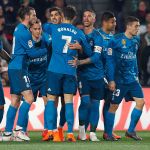