0
Real Madrid tonight failed to extend their winning run. The Whites produced a good first-half display in which they carved out several chances to break the deadlock. However, Espanyol went on to take the spoils, courtesy of Gerard Moreno's 93rd-minute strike. Despite ultimately losing the game, Zinedine Zidane's troops began proceedings firmly on the front foot. Before the first quarter of an hour was up, the visitors had already fashioned three clear-cut openings. Diego López was equal to Gareth Bale's thumping header and then a wicked deflection after the ball ricocheted off Aarón, both of which came following attacking forays down the right flank. Raphaël Varane also came close to making the breakthrough when he leapt highest to meet a corner.

After holding firm following Madrid's bright start, Espanyol began to pose a threat on Keylor Navas's goal. In the 26th minute, the Whites' custodian just about managed to keep out a Gerard Moreno effort. A few minutes later, the Catalan hitman planted the ball in the back of the net, but the effort was ruled out for offside. Madrid then went on to have a further two chances before the break. Firstly, Marcos Llorente tried his luck from the edge of the area and then a Bale effort struck Víctor Sánchez's hand inside the area.

Chances
If the first period saw Real Madrid dominate, the second half began in a more open fashion, with chances for both sides. Espanyol fired first with a shot from Sergio that was saved by Keylor before a header from Óscar Duarte struck the crossbar. Real Madrid hit back thanks to good work down the right by Achraf which resulted in a good save by Diego Lopez and a shot from outside the area by Mateo Kovacic.

The game was now an end-to-end affair and Real Madrid looked to make the most of their attacking quality. However, the minutes passed and the Whites couldn’t find a way through the opposition's defense. The home side also went in search of the three points. In the closing stages, Gerard Moreno, on 89', overhit a cross before Marco Asensio delivered a dangerous centre that didn’t find a striker in added time. With Real Madrid pushing forward, Gerard Moreno took advantage of a counter-attack in the 93rd minute to claim the three points for Espanyol. 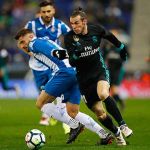