The academy graduate was key for across both games as Real Madrid sealed their place in Friday's draw.
Santiago Bernabéu

2
Real Madrid marked their first game at the Bernabéu in 2018 by clinching a place in the Copa del Rey quarter-finals after drawing with Numancia (5-2 on aggregate). The Whites needed just ten minutes to open the scoring. Carvajal curled in a lovely cross from the right-hand side and Lucas Vázquez arrived at the back post to head home.

The tie was now 4-0 in Real Madrid's favour and they had further chances to increase the deficit with an Asensio free-kick with 14 on the clock and a Lucas Vázquez effort seven minutes later. Despite their superiority though, it was Numancia who levelled proceedings on the stroke of half-time, Guillermo rounding off a quick counter attack by the visitors.

Lucas’ second
Real Madrid came out of the tunnel looking to retake the lead and after a chance for Nacho in the 55th minute with a shot that went over, the home side went back in front in the 59th minute. Asensio crossed from the left, Mayoral met it with his head and Lucas Vázquez was smarter than the rest has he stuck out his leg to get his second of the night.

Numancia eqauliser
The Whites were ahead again but Numancia refused to throw in the towel and almost got the leveler in a one on one, but Casilla came out on top when up against Nacho on 72'. They came close again seven minutes later but Kovacic got there ahead of Pere Milla as he was waiting to turn the ball into the net. The equaliser did come in the 82nd minute, when Saul’s cross picked out Guillermo who was on target for the visitors. Real Madrid now wait to see who they’ll come up against in Friday's quarter-final draw. 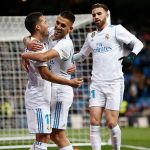