Cristiano Ronaldo (2), Marcelo and Kroos clinch the three points for Real Madrid at one of LaLiga's most hostile grounds.
Mestalla

4
Real Madrid grabbed a hard-fought win in one of the most hostile stadiums LaLiga has to offer. The game was intense from the off as both teams had some great chances, The Whites went ahead after Cristiano Ronaldo was awarded a penalty. Valencia reacted well in the second half to cut the deficit, but Marcelo and Kroos sealed the win with two goals in the dying minutes.

The game set off at a frenetic pace and both teams looked to put their stamp on things. Bale had a good chance when the Valencia defence had a momentary lapse of focus, but Neto was in the right place at the right time to make a save. Rodrigo took his chances at the other end, only to blast his attempt from outside the box over the crossbar. As the first quarter of an hour, Valencia got a corner which led to a stellar counter-attack from Marcelo, Benzema and Cristiano. The Portuguese talisman was awarded a penalty after contact with Montoya. He took the spot-kick, 0-1 to the visitors. The game was still wide open but Real Madrid looked lethal every time they got to the edge of their opponent’s box.

A brace for Cristiano
Parejo and Kondogbia led the charge as Valencia kept up their momentum in the game. In fact, the Frenchman sent in a ferocious shot to test Keylor Navas (on 25 minutes). Howeverm it was at the other end of the pitch where the goals came next. Carvajal sent in a cross for Benzema, who was also deemed to have been fouled by Montoya. It was Cristiano who took the second penalty of the afternoon (37’). Rodrigo and Guedes both tried in vain to level the affair, but it went to half time 0-2.

With Soler coming on in place of Guedes at the break, Valencia looked to step things up after the restart. Real Madrid meanwhile looked to pounce on the space in behind to put the game to bed. Benzema had a great chance to do just that, spinning and sending his shot narrowly wide with 54 on the clock. It was the hosts who found the net next though, as Parejo swung in a corner and Santi Mina rose highest to head home (58’). Spurred on by the goal, Valencia surged forward and Keylor had to stand strong to deny Parejo and prevent the equalising goal.

Despite forging less opportunities in the second half, Real Madrid continued to look a threat when they did get forward. A fine piece of play from Bale on the right nearly led to the third for Cristiano Ronaldo. Zidane brought on reinforcements in the middle in the shape of Lucas Vázquez and Asensio with 15 minutes to go and the game wide open. Cristiano had another chance to net from a Modric cross (82’) before two minutes later, Marcelo linked up with Asensio and slotted home coolly to make it 1-3. With the three points already in the bag, Kroos finalised a sensational team move to add the gloss to a fine 1-4 result (89’). 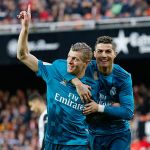