Real Madrid had plenty of chances but couldn't find a goal against Villarreal, who scored the decisive goal on 87 minutes.
Santiago Bernabéu

1
Real Madrid lost against Villarreal in a game they should have won. Much like many games this season, they were the bette side for most of the game and had some clear cut chances, but could not muster the all important goal. Zidane's side fought til the last in search of the win, but their bad luck continued as Fornals scored the winner for the visitors to clinch the three points.

Real Madrid started off in an intense manner and pressed Villarreal well. The Whites looked to be in control and moved the ball around well enough, showing patience as they looked to take their chances. Their first clear chance was rifled home by Bale, only to be ruled offside (14’). As the minutos went by, Zidane's team edged closer and closer to the visitor's box. Asenjo saved his team on two occasions as Marcelo and Cristiano both tried their luck, the latter sending in a poweful free-kick.

Chances
With less of the ball than they would have liked, Villarreal looked to create something, as they got the ball up to Bacca quickly. Nacho was on hand to snuff out the most dangerous attempt on the half hour mark. Real Madrid kept on turning the screw. In the space of a minute, Cristiano had two near misses, both going just wide of the goal.

With 39 on the clock, a Bale header from inside the area was blocked by Álvaro’s right hand, but the referee failed to point to the spot, before the Welshman went for goal once again on 43’ with a right-footed strike. The first half came to a close with Asenjo stopping another point-blank effort by Cristiano. The Whites’ chances had failed to yield a goal as the whistle blew for half-time.

The second period began with both sides trading blows. Cheryshev had just come on, and it was he who sent off the first warning shot. Kroos then responded in kind, but Asenjo stood strong once more. The game was far more open than in the first 45 minutes. Bacca continued to pose a threat for the visitors, while Marcelo, Modric and Cristiano Ronaldo all tried their luck without reward for Real Madrid.

Penned in at the end
With 20 minutes to go, Asensio and Lucas Vázquez brought some fresh legs to proceedings as the team went on in search of the winning goal. Zidane’s men sent ball after ball into the box, but time and again failed to find their target. With the clock against them, the Whites threw everything forward. Modric fired over from the edge of the box (81’). With the team pouring forward, Villarreal pounced on their chance to counter-attack, and while Keylor stopped Unal’s initial attempt, Fornals was on hand to turn the rebound home. It was a cruel blow for Real Madrid, who know turn attentions to the Copa del Rey quarter-finals. 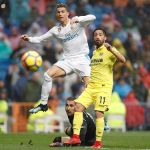