The Portuguese star won the award for the second consecutive year at a gala held at the Eiffel Tower.

Cristiano Ronaldo was on fine form in Paris where he picked up his fifth Ballon d'Or before the inspiring backdrop of the Eiffel Tower. The forward received 946 points to win the trophy awarded by France Football, eclipsing Messi (670) and Neymar (361) in a vote open to journalists from 176 countries. He proved the difference in the Champions League final, netting a double and sealing his place as the tournament's leading scorer for the fifth year in a row. He was also crowned LaLiga champion and got his hands on the Spanish and European Super Cups with Real Madrid.

The madridista shows no sign of letting up in his pursuit of titles and individual records which have seen him accumulate a quite astonishing trophy haul. He was voted as UEFA Men's Player of the Year for the third time, having already picked up the award in 2014 and 2016. He has also got his hands on The Best, award for the second consecutive year, making him the only player in the world to possess this particular accolade. Just recently, he has also become the first player in history to score in every game of the Champions League group stage.

"I'd like to thank everyone who helped me to win it"

With the trophy grasped firmly in his hands, Cristiano Ronaldo had a few words of gratitude for his teammates: “I'm very happy. Collective trophies are crucial in winning this individual award and so I'm very thankful to my teammates at Real Madrid and everyone who has helped me get here”. Two days after the event, Cristiano presented the trophy to the Bernabéu, alongside the four he had won previously. The fans responded with an enormous ovation for Real Madrid's all-time leading goal scorer.

The heir to Di Stéfano
Florentino Pérez reflected the pride at his club boasting a player of Cristiano's quality: "This fifth Ballon d'Or is an honour for Real Madrid. It's recognition for the best player in the world, Cristiano Ronaldo. For me, Cristiano is the most complete player since Alfredo Di Stéfano, he is his natural heir. When he's gone, there will be a new era at Real Madrid, just as happened after Di Stéfano”. 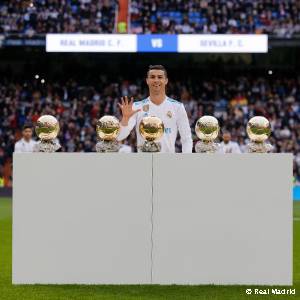