Cristiano Ronaldo celebrated his Ballon d'Or win with a double, while Nacho, Kroos and Achaf also found the net in an offensive exhibition against Sevilla.
Santiago Bernabéu

0
The Santiago Bernabéu enjoyed a perfect afternoon of free-flowing football with goals aplenty, as Real Madrid produced an offensive exhibition to steamroller Sevilla, smashing five goals in what was a spectacular first half. Two came from the boots of newly crowned Ballon d'Or winner, Cristiano Ronaldo, who dedicated his award to the fans ahead of kick-off. Nacho, Kroos and Achraf topped off an incisive demonstration of the madridistas' attacking prowess before they head off to compete in the Club World Cup.

Real Madrid flew out the blocks once again, just as they had on Wednesday against Dortmund. Inside two minutes, the Whites had already tested Sergio Rico with a Lucas Vázquez effort, and been awarded two corners. It was the second of these which produced the opener. Kroos whipped it in, and Nacho took advantage of a poor clearance by Muriel to turn the ball past Rico (3’). Having gone ahead so quickly, the team continued to stream forward with intensity and a clinical edge, well-orchestrated by a superb Asensio. With 23 on the clock, the man from Mallorca threaded a sumptuous through ball to Cristiano Ronaldo, who put his side two up.

Barely half an hour of play had passed when the third goal came. Jesús Navas handled a Marcelo flick inside the area and Cristiano drilled home the resulting Penalty (31'). Far from siting on their lead, Zidane's team continued to look for more goals. Sergio Rico made two good saves, firstly from Modric’s effort from outside the area and then an acrobatic shot from Cristiano.

However, the Sevilla goalkeeper could not do anything about the fourth goal. Kroos picked up the ball in the centre of the park and played a nice one-two with Lucas before finishing (38'). Real Madrid were on fire and there was time for another before the break. Achraf joined the party coming in from the right to score his first official goal for Real Madrid (42').

Ovation for Cristiano
The score line led to a drop in intensity after the break. Sevilla tried to reduce the deficit through Nolito and Muriel but Keylor Navas kept them out. Although the match didn’t have the same buzz in the second half, the Whites continued to create chances. The best opportunity came in the 67th minute when Benzema hit the post after a cross from Marcelo. With the result practically in the bag, Zidane was able to rest Kroos, Modric and Cristiano, replacing them with Llorente, Ceballos and Isco. The Bernabéu got to its feet in recognition of the five-time Ballon d’Or winner as he departed. Llorente and Achraf had the chance to extend the lead in the last few minutes but the score stayed as it was. 5-0 and Real Madrid head to Abu Dhabi in good shape. 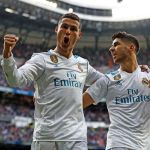