The Portuguese forward, who got his name on the scoresheet for a sixth successive Champions League matchday, Borja Mayoral and Lucas Vázquez were all on target in the win over Borussia Dortmund.
Santiago Bernabéu

2
Champions League nights at the Santiago Bernabéu are always special occasions, regardless of what's at stake. Real Madrid, who had already sealed their passage into the next round, brought the curtain down on their group-stage campaign with a 3-2 victory over Borussia Dortmund in a game that saw Cristiano Ronaldo become the first player to find the net in each of the six group-stage matchdays. Borja Mayoral and the Portuguese striker put the hosts two goals to the good in what was a rip-roaring start from Zinedine Zidane's men, after which Borussia hauled themselves level, before Lucas Vázquez struck after the break to seal the win.

With five changes from the side that started at San Mamés, Real Madrid came out all guns blazing right from the off. Ronaldo made his intentions clear with his very first touch as Burki palmed away his powerful strike with just three minutes on the clock. However, this proved to be a foretaste of what was to come as Madrid forged ahead. The game was barely eight minutes old when the Portuguese forward shaped in a cross from the left that Isco touched on to Mayoral, who finished with aplomb to claim his maiden Champions League goal. The home fans weren't made to wait long before seeing their side double their advantage. Indeed, just four minutes had elapsed when Cristiano Ronaldo picked the ball up on the edge of the area and unleashed a strike which caught the visitors by surprise as it flew into the net. A sublime strike and one that clinches a record to boot.

Chances
Real Madrid were an offensive juggernaut and far from settling on their lead, they went in in search of a third. Casemiro and Theo poured forward in attack and both came close to extending the hosts' lead. However, Dortmund responded to the madridistas' lightning-quick start and began to pose a threat, with Pulisic heavily involved in the visitors' first sights on Keylor Navas's goal. In the 38th minute, Asensio entered the fray for the injured Raphaël Varane and on 42' Mayoral came a whisker away from claiming his second of the night. However, it was the Germans who were next to strike as Pierre Emerick Aubameyang, who had earlier failed to finish when clean through, nodded home to make it 2-1 (43').

​The second half didn't get off to the best of starts for Real Madrid. Just three minutes after the restart, Aubameyang reacted quickest when his shot was parried and made no mistake at the second attempt to level proceedings. The game was blown wide open and the attacking players were getting the better of their defensive counterparts at both ends. With 52 minutes gone, Cristiano pulled his effort well across goal when up against the German stopper. The Champions League's leading marksman was looking the most likely of the Whites' front line and showed no let-up in his quest for further goals.

Lucas Vázquez strikes
Dani Ceballos and Marcos Llorente were called upon to bring some fresh legs to the centre of the park as Zidane's team continued in their pursuit of the third goal. They began to assert themselves once again and a period of real dominance saw Borussia pinned back deep in their own half. Theo and Marco Asensio were a constant menace with their crosses from wide areas, but a clear opportunity just wouldn't present itself. Ultimately, though, their persistence paid off, as Theo nodded down for Lucas Vázquez to net from the edge of the area (80') and seal a well-deserved victory to close out the group stage. The Whites must now wait to discover their opponents in the last 16. 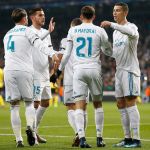