Real Madrid hit the woodwork on four occasions, but came from behind to beat Al Jazira and will face Gremio in the final on Saturday.
Zayed Sports City Stadium

2
Real Madrid have booked their place in the final of the Club World Cup, set to be played this Saturday against Gremio, at 6:00pm Spanish time. Just as Zinedine Zidane had warned in his pre-match press conference, it was far from an easy game, and the Whites had to come from behind after Al Jazira had opened the scoring. Ultimately, they ran out winners despite enjoying no fortune in front of goal, seeing three efforts crash back off the post and one off the bar.

The two teams' intentions were clear from the off. Real Madrid dominated possession, while the Abu Dhabi-based outfit sat back waiting to hit them on the break. It didn't take long for the chances to start flowing for the Whites, with the first presenting itself after just five minutes. Isco crossed for Cristiano Ronaldo, but his header was kept out by Khaseif. Two minutes later, and the same duo were at it again. The man from Málaga swung in a corner, the Portuguese star rose highest to head towards goal, but the ball struck a defender and the keeper was able to turn it behind. The very next move then saw Modric shoot from the edge of the box but his effort came back off the post.

Luckless run
Real Madrid were streaming forward at every opportunity and continued to carve out the chances. Benzema played a sumptuous through ball on 10 minutes to find Cristiano Ronaldo, but Alattas pounced to take it off his toe just as he was poised to turn home. The goalkeeper was the standout man for Al Jazira and he cemented his place as their Man of the Match with two phenomenal stops from Benzema's header on 16’ and then Modric's left-footed volley with 20 minutes on the clock. From the resulting corner, Varane shot towards goal but his attempt was cleared off the line.

The European champions were finding a goal hard to come by, but Al Jazira it was who spurned a gilt-edged opportunity to have forged ahead themselves when Mabkhout contrived to fire wide of the target when clean through on Navas in the 21st minute. Madrid had the ball in the back of the net on the half-hour mark when Casemiro nodded home, however, after consulting the VAR, the effort was chalked off with Karim Benzema in an offside position. Just as it looked as if the sides were destined to go in at the break with the score at 0-0, Al Jazira caught Madrid by surprise in a counter-attacking move that was finished off by Romarinho.

Cristiano Ronaldo levels terms
The second period began with a let-off for Madrid, when Boussoufa tucked the ball home in the 47th minute, only to see his effort ruled out for offside. That disallowed goal served to shake Real Madrid into action and just six minutes later the Whites were level. Modric slipped a threaded through ball to Cristinano Ronaldo, who unleashed a fine strike that flew past to the helpless Alsenaani, who had just entered the action in place of the injured Khaseif,  and in to the far corner. The Whites could have even taken the lead on 61' but for a fine save from the hosts' goalkeeper, who got the better of Benzema in a one-on-one.

Further chances
The madridistas kept probing and in the 66th minute they were once again denied by the woodwork, when Benzema's left-footed strike from inside the area cannoned back off the upright. Madrid were again left to rue their luck three minutes later, when the French hitman saw another effort come back off the woodwork. The luckless European champions had now been denied by the upright on three occasions and the crossbar once.

Bale's winner
Madrid's dogged insistence was ultimately rewarded in the 80th minute when Lucas Vázquez's pull-back found Gareth Bale, who had only been on the pitch a matter of seconds after coming on for Benzema, and he handed Madrid victory and sealed the Whites' passage into the final. The Welshman had the chance to further extend Madrid's lead on 87' with a stunning acrobatic effort which forced the best out of Alsenaani. Gremio now await in Saturday's showpiece, which kicks off at 6:00pm CET, as just one game now stands between Madrid and a historic feat of winning a fifth title in 2017. 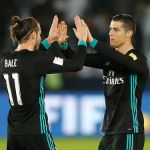