“I’m delighted to have made my debut for the best club in the world”, said the youth team graduate.
Achraf made his official debut for Real Madrid. He did so in the game corresponding to match day seven of the league, in which the Whites beat Espanyol 2-0. The full back, who had already played in a few friendlies with the first team, started and completed the whole match against the Catalan team at the Santiago Bernabéu.

The academy graduate was thrilled after the game: “I’m delighted to have made my debut for the best club in the world, it’s a day I’ll never forget. My teammates help me out and give me advice every day and everything is easier when they’re alongside you. I felt comfortable and I’ll keep growing as a player one step at a time. Yesterday, sadly, Carvajal had a problem and Zidane called to say I should stay relaxed but that I was going to play, and to just do things like I have been in training”. 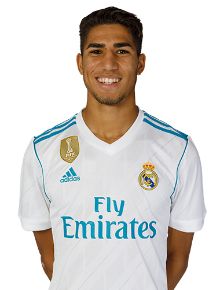