Sergio Ramos netted the Whites' third goal with an overhead kick, sending his side to the top of Champions League Group H.
Santiago Bernabéu

0
The European champions made their debut in this season’s Champions League in style. The Whites, who are now the first to appear in 21 consecutive editions of the biggest competition in Europe, thrashed APOEL at the Santiago Bernabéu to top Group H.

It took only ten minutes for Real Madrid to go ahead. Isco started the counter-attack and managed to get past his man with great skill, passing the ball to Bale whose superb pass across the face of goal was beautifully converted by Cristiano Ronaldo, who was lying in wait.

Chances
The Bale-Ronaldo connection was strong and they could have scored more for the Whites. The Welshman drove another sublime pass in from the left on 15 minutes but the Portuguese talisman could only find the outside of the net. In the 25th minute, Kroos came on for Kovacic, who went off due to injury. Real Madrid had another chance before the break but Cristiano put the ball just centimetres wide of the APOEL goal after another strong effort from Bale.

The second half began with a high intensity and the Whites almost doubled their lead in 46' after a cross from Carvajal was met by Cristiano Ronaldo's shot which hit the bar and bounced back up off the goal line. It proved to be a mere warning as three minutes later the second Whites’ goal arrived. Cristiano Ronaldo converted a penalty after the referee pointed to the spot due to Roberto Lago handling a cross from Bale. The Portuguese forward put away the spot kick and bagged his brace.

Ramos with the overhead kick
Real Madrid dominated with ease and could have scored the third in a one-on-one where Isco was unable to get the better of Waterman after 54 minutes. Seven minutes later the keeper was unable to prevent the goal as Ramos stole the ball and started a counterattack which saw Marcelo and Bale link up before the Whites’ captain finished things off with a beautiful overhead kick.

There were no more goals but Champions League debuts for Ceballos and Mayoral saw them replace Isco and Bale. Real Madrid now have their focus on their next LaLiga game on Sunday at Anoeta against Real Sociedad. 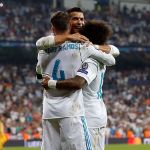